It claims to be Europe's largest data center hub, but sector given the red light

Amsterdam claims to be part of Europe's largest data center hub, and is experiencing massive growth, and yet the municipal authorities have called a halt to the establishment of new data centers in the area until 2020.

The authorities say this move is necessary because the building of data centers is out of their control. The Dutch Data Center Association (DDA) says the decision is unfair, and represents an abrupt change of direction after the city authorities had agreed a strategic direction for data centers in the area, and the DDA's members are already meeting all the authorities' demands. 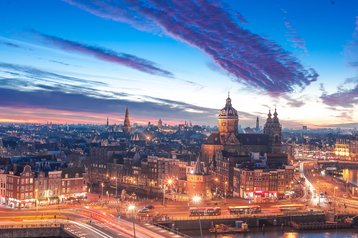 "We have been in dialog with our partners at the municipalities, and this was a very sudden decision," Judith De Lange of the DDA told DCD. "They are pressing to be the digital city of Europe, which does not strike with this announcement."

The Municipality of Amsterdam, along with the adjoining urban Municipality of Haarlemmermeer, announced the pause in a press release on Friday, which said (translated): "Amsterdam and Haarlemmermeer have both taken a preparatory decision, which will temporarily halt the establishment of data centers while awaiting new regional policy."

The decision was necessary, said the translated release, because: "Data centers have become indispensable facilities for almost all residents, businesses and institutions, but they also take up a lot of space and, due to the high energy consumption, take a big load on the electricity grid. At present, municipalities have hardly any instruments at their disposal to steer where the data centers are located, or which requirements they must meet."

“The arrival of data centers is, in a sense, a result of our own consumption and lifestyle: We want to be online on our phones and laptops all day. To a certain extent we will have to accept the associated infrastructure, but the space in Amsterdam is scarce," said a comment from Marieke van Doorninck, Amsterdam's alderman for sustainability and spatial development in the release (translated).

The translated statement from Mariëtte Sedee, alderman for spatial development, environment and agricultural affairs in Haarlemmermeer, echoed this: “The space in our municipality is of great value... It is necessary to be on-site and formulate policy first, so that we keep a better grip on the location of data centers.”

The authorities' release says the pause aims to make sure "that data centers occupy as little space as possible... and (architecturally) fit in well with the environment." Confusingly, it says that "ongoing projects that are in line with the new policy will be granted for the time being," having previously said that the municipalities are halting new developments "while awaiting a new regional policy."

The sticking point appears to be the reuse of waste heat, but again, the DDA says it is already meeting the authorities' demands.

The Netherlands is heavily dependent on fossil fuels for its electricity generation, and the authorities have been trying to encourage the use of industrial waste heat to warm homes and other buildings. The municipal authorities agreed that data center waste heat could be classed as a renewable energy source, but they appear to be frustrated at the rate of take-up.

"We are going to set requirements in the area of ​​making available residual heat free of charge for the heating of homes,” said van Doorninck (translated), and the release says that "data centers have a lot of residual heat that now often remains unused, while it can be used to heat homes and thus contribute to making our heat supply more sustainable."

In response, the DDA issued its own release, and De Lange explained to DCD said that Amsterdam's data centers already offer their residual heat for free, although the lack of municipal district heating systems means that actual heat reuse is difficult without a more extensive district heating network.

"In 2017, we said we would give [waste heat] for free, as a way to start discussion," said De Lange, and pointed out that new data centers in the city have been built with heat reuse in mind - but explained that the offer is on a "collect at the door" basis, and someone will have to pay to build the infrastructure to make use of the heat.

A large proportion of the DDA's members have also adopted renewable energy, either directly or through certificates, she said.

Despite their conflicting releases, the two sides appear to agree on quite a few things, and it is possible these are bargaining positions. In its release, the Municipality of Amsterdam "invites the data center sector to contribute their thoughts on the elaboration of the location policy," which is due to be completed by the end of 2019.

Both sides have a strong incentive to make it work: in a recent report, the DDA claimed that Amsterdam is now the largest data center hub in Europe, having grown nearly 20 percent last year, to a total of 771MW, overtaking London. To reach this figure, the DDA included Amsterdam, Haarlemmermeer, and the Agriport development in Eemshaven, north of Amsterdam, where hyperscale providers including Google and Microsoft have located.