The future of fiber optics in the data center 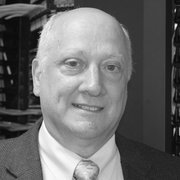 Dr Rick Pimpinella, Panduit Dr Rick Pimpinella is the chief engineer of Panduit. He received his B.S., M.S., and Ph.D. degrees in Physics from New York University Tandom School of Engineering. From '81 to 2001 he was employed with Bell Laboratories, where he pioneered the use of silicon processing technology for the fabrication of optical subassemblies for the passive alignment of optical fibers to photo-detectors and lasers.

What does the roadmap for fiber optic cabling look like in the coming years?

Optical fiber cabling will be the only network connectivity capable of supporting data rates of 50Gb/s and beyond in typical network applications. This can be demonstrated by referencing state-of-the-art 50Gb/s network switches. These new high-speed switches typically contain a 50Gb/s Application Specific Integrated Circuit (ASIC) designed to support 256 - 50Gb/s switch ports. For these large port counts, it is advantageous to aggregate 8 – 50Gb/s ASIC I/O ports to produce 1 – 400Gb/s optical switch port. Aggregation reduces the number of switch ports from 256 – 50 Gb/s ports, to 32 – 400 Gb/s ports in a 1 RU form factor.

These high-speed high port density network switches have significant consequences on network connectivity. First, when used as a server switch, they require breakout cabling to physically separate the 8 – 50 Gb/s server ports from the 400 Gb/s switch port. Breakout cabling will comprise a MPO connector on one end, fanning out to 8 server duplex fiber pairs. A second consequence is the fact that 256 – 50 Gb/s servers will occupy anywhere from 4 to eight network frames. The reaches required to support 256 servers exceed the maximum reach of copper connectivity. Therefore, multimode fiber will ultimately replace copper as it becomes the most cost-effective solution for port breakout server connectivity. 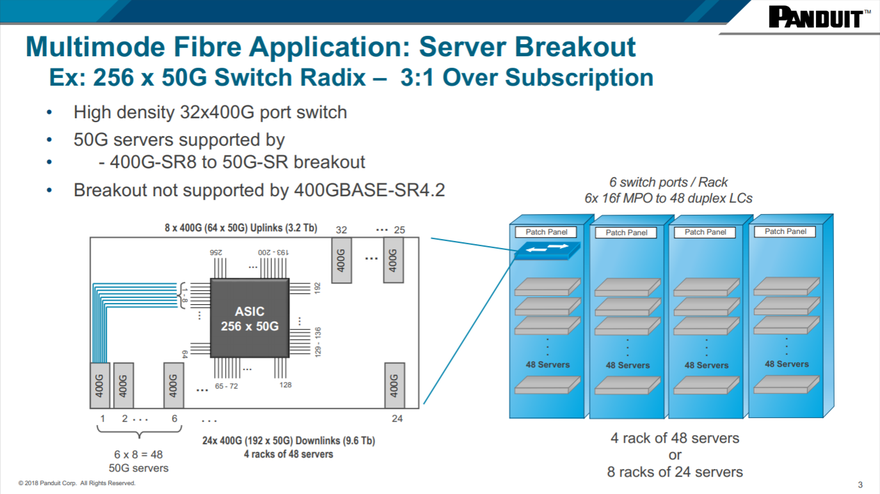 Parallel optics versus wavelength multiplexing with OM5 on multimode

For multimode fiber, as the speed increases, parallel optics is the primary technology standardized by the IEEE 802.3 Ethernet and Fiber Channel Standards bodies, and parallel optics will be the technology of choice for at least the next 20 years. In 2021 however, there will be one Ethernet specified 400 Gb/s solution that will, in fact, use two wavelengths (400GBASE-SR4.2).

There are three reason why parallel optics is the preferred technology, the first and most important is cost. The cost of SWDM transceivers will be higher than parallel optics. This is due the addition of WDM devices, the utilization of multiple wavelength VCSELs, additional materials and assembly steps, and other attributes. Although the cost of cabling is lower for SWDM, a cost benefit is not realized until the channel reach exceeds 100m, which exceeds the maximum reach for the majority of multimode fiber applications. The third issue is eye safety. Due to the high insertion loss of WDM devices, transceivers must emit high optical power levels which approach eye safety limits.

The promise of single mode fiber

Until recently, I also shared the belief that single-mode fiber would ultimately displace multimode fiber in the data center. As a matter of fact, I’ve been hearing this same assertion for more than 30 years. Recently however, I thought this might be possible based on the comparable prices we now see in the marketplace between 10GBASE-LR single-mode and 10GBASE-SR multimode transceivers, and the relatively low cost of 100G PSM4 transceivers. However, discussions with major transceiver manufacturers have caused me to change this opinion. 10 Gb/s transceivers are a 16-year-old technology and the product demand is rapidly decreasing in favor of 25 Gb/s transceivers. The high production capability in combination with lower sales volume has driven the price down to the low levels we now see. In regard to 100G PSM4 transceiver, according to transceiver manufacturers it is generally believed the low cost of PSM4 utilizing photonic integrated circuits was an anomaly and is difficult to sustain in the future. It is not expected that we will see a significant cost reduction of single-mode transceivers relative to multimode transceivers for future applications for many reasons.

Single-mode distributed feedback (DFB) lasers are inherently more expensive than multimode VCSEL lasers, and this cost differential will continue indefinitely. The higher cost of single-mode transceivers translates to a higher total channel cost in spite of the fact that single-mode fibre is cheaper than multimode fiber. It is also important to note, that according to an Ethernet Alliance study, 87 percent of single-mode channels in hyperscale data centers are less than 150 meters, which can be supported by multimode fiber solutions.

The role of fiber and cabling manufacturers in the future

The cable manufactures’ role is to adapt to new customer requirements in terms of density, bandwidth, latency and form factors. Clearly, there are different needs for hyperscale than for enterprise data centers. Cables with larger fiber counts, with small primary buffer diameters will find more applications. The use of stranded ribbon cables is a way that can allow operators faster installations. Cables with more accurate fiber length requirements not only save money to the customer, but also facilitate the installation. The need of equalized optical length cables is already present for some fintech customers, whether that is standards lead or a government or financial authority requirement.

The bandwidth and bandwidth characterization are still critical for multimode fiber applications. Panduit is collaborating in standards to develop more accurate ways to characterize the actual performance of the fibre. For example, in TIA we are re-evaluating the meaning and values of VCSEL weights which is critical in the estimation of fiber bandwidth. In IEEE 802.3 we are studying the limits of multi-wavelength transmission and new link models for PAM-4.

A fundamental part of any optical cable is the connectors. The impact of connectors is critical. A bad connector will impact the system not only by introducing noise which can be low, but more importantly by reducing the bandwidth capabilities. The noise or bandwidth penalties can be several times higher than the loss. For this reason, we actively participate in all the standards to ensure that competent specification for fiber and connectors are consistent with system performance. We were the first company demonstrating 50G PAM-4 technology for MMF in collaboration with our partners and academia.