If we want to make data centers more inclusive, it will take more than fine words

At most industry awards nights, the comedian is really not the most important part of the evening. Someone stands up and says something vaguely good-natured, amusing (and usually ill-informed) about the industry. Then they sit down, and are forgotten, as we move on to the actual awards.

The DCD>Awards this week were a little different. Comedian Deborah Frances-White, host of podcast The Guilty Feminist, found herself caught up in an issue this industry needs to sort out, providing an object lesson in just how difficult that process will be. 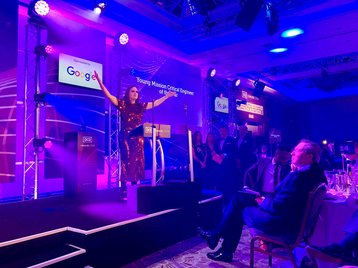 The silence of the women

DCD is well aware that this industry does not reflect the diversity of the world around us - and is massively the poorer for it. As data center operators gear up for massive build-out programs, they find they struggle to get the staff to carry them through. And this is made all the harder when the pool of talent they choose from is limited to a fraction of the potential population.

Why are women and minority groups so under-represented in the data center industry, after years of data center leaders trying to turn the tide? Frances-White started to suggest some answers: they are silenced. They have answers and contributions to make, but aren't heard.

If a middle class, white British businessman called Toby found himself in a Colombian drug cartel, he would not spontaneously contribute his skills, even if he had a mass of knowledge about supply chains and shipping which could help their business. Likewise, women in data center businesses are likely to be "there" but not "included."

The message wasn't unanimously well-received. At first, as a babble of chatter continued, she chided the audience: "I'm being paid thousands to stand up here and talk and still there are men talking over me."

Then, she was full-on heckled. Now, abusing a powerful comedian who has a microphone is always a risky thing to do, and when this man said "What has this got to do with DCD?" he got what he deserved: a dressing down. Frances-White, who is an executive coach as well as a stand-up comedian, put him firmly in his place. She is all too familiar with sexism in her own industry, and wearily disappointed that data centers also have a way to go.

The audience - it seemed to me - took her side. "This is important," a number of people said to me. However, it was very clear that several people were uncomfortable. This was a hugely white and male audience, which was not used to having this fact exposed by a woman speaker who did not simply reflect them back to themselves.

The fact is that embracing diversity is not simply a matter of saying the right thing, or making a token gesture. Attitudes are important. We've heard the message at our events, from people like Baselayer's Susanna Kass. For a lot of people, a feminist comedian is exactly the right thing to keep us on our mettle. For others, she is a challenge and a threat.

As I said, awards evenings move on from the comedy to the actual award winners. And in this case, there were definite signs that things are moving in the right direction.

Our Business Leader of the Year is Funke Opeke, founder and CEO of MainOne in West Africa: "Those of you that have followed her exploits in the press know that she is not afraid to speak up, assert herself, deliver results and actively take on challenges within her male-dominated field," says the citation. "Importantly, she encourages the women of her team to do the same."

And our Data Center Manager of the Year, Sunday Opadijo of Rack Center, is an African who has delivered 100 percent uptime despite the climate and the temperamental power grid of Nigeria.

As DCD's CEO George Rockett said in his introduction, we are making small steps, and it's way too early to claim any victories for diversity and inclusion. But, however small, those steps are being made.