Congratulations to the best and the brightest 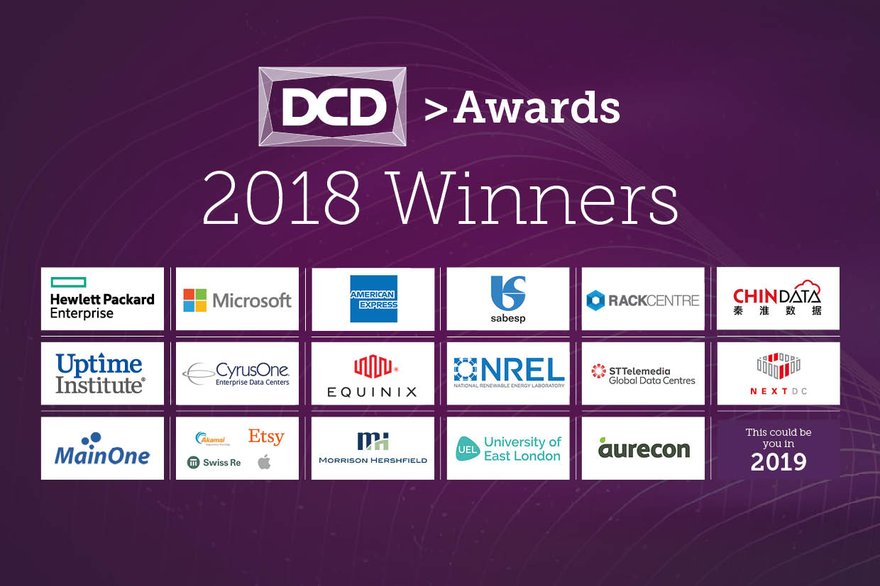 Following months of deliberations, DCD has announced the winners of the annual DCD Awards, celebrating the industry’s best data center projects and most talented people.

The winners received their trophies on Thursday evening, at a gala ceremony held at the Lancaster Hotel in London, hosted by comedian Deborah Frances-White.

The finalists were selected by an independent panel of data center experts from hundreds of entries, arriving from across the world.

Click here to see the names of all the finalists.

Living at the Edge Award

ChinData's new hyperscale data center campus in Beijing lies at the heart of an edge network of 220 custom-built "Gypsophila" edge facilities across China, which are designed in collaboration with Huawei to support the vast growth in consumer demand for 5G and AI data.

With over 13,000 active connections, ECX Fabric has the richest ecosystem, and is becoming the de facto global standard for how enterprises and service providers connect to the cloud.

With a world-leading annualized average PUE of 1.036 and pioneering work in component-level liquid cooling, NREL's entry really impressed the judges.

Microsoft worked with their technology partner Eaton to turn tried-and-true UPS technology into a value-generating power grid asset. This is the second year running that Microsoft picks up this award!

Cloud Migration of the Year

The project involved hundreds of scrum teams, thousands of engineers across the globe and the re-engineering of hundreds of applications. As a result, 77 percent of their cloud-eligible apps have been migrated already.

Data Center Manager of the Year

Working in the harshest of environmental conditions, including high humidity and the temperamental power grid of Nigeria, Sunday and his team have maintained 100 percent uptime and dealt with situations that would send shivers down most data center managers’ spines.

Design Team of the Year

NEXTDC Engineering + partners Aurecon have been awarded the Design Team of the Year for designing and building Australia’s first data centers to receive Tier IV certification from Uptime Institute - a testament to their advanced reliability features, especially impressive under the hot Australian sun!

Industry Initiative of the Year

The EURECA project impressed our judges by playing a major role in improving energy efficiency across Europe and saving data centers at least 52GWh per year. The project’s effect is being felt in the policies, standards, and best practices it helped shape - and these will impact the industry for years to come. Eureka!

Laura Rogers is truly the 'one to watch.' Her market knowledge, technical strengths, drive for personal growth and well-honed skill-set made her our judges’ favorite. Committed to continuous improvement, Laura is always looking for ways to add value at work.

With over 290MW of new renewable generation capacity across four data center operators, this ambitious and historic collaboration showed our judges what can happen on a global scale when big tech companies come together to put actionable climate change strategies in place.

Business Leader of the Year

Funke Opeke is no stranger to hard tasks. She has led their technology company to success in West Africa, having to build the component parts of a data center business from the ground up, including the cable that attaches it to the rest of the world.

Those of you that have followed her exploits in the press know that she is not afraid to speak up, assert herself, deliver results and actively take on challenges within her male-dominated field. Importantly, she encourages the women of her team to do the same.

Pitt Turner has helped shape the mission critical data center sector, perhaps more than anyone else. It all started with an idea… of course. One that sought to define an engineering challenge, which became a paper, which became adopted by the entire industry. He has helped clients justify several billion dollars of site infrastructure investments since 1992, and co-invented what has become the industry standard Tier-level site infrastructure rating system.

Public Vote: The Most Extreme Data Center on the Planet

Once the thrill of orbiting our planet at some 400km wears off, astronauts on the International Space Station have HPE’s Spaceborne Computer to run their experiments on.