The cloud is not killing enterprise IT

There are many things swelling the public cloud, but the industry is closely watching the rate at which enterprise workloads are moving there, because enterprise IT is a proven, high-margin sector with large, reliable budgets.

The popular view is that enterprise IT is rapidly migrating, as infrastructure layers are outsourced to cheap, reliable, flexible, pay-as-you-go cloud services - like AWS, Azure and Google Cloud. Many predict a tipping point where non-public cloud or non-software as a service (SaaS) IT becomes too expensive and too difficult to support.

Some studies suggest we are nearly there, but Uptime Intelligence believes the tipping point is some years away.

The move could be stepping up: In 451 Research’s latest data, 39 percent of organizations say that by 2020, the bulk of their data will be in SaaS or a public cloud service - and nearly half (47 percent) say their workloads will still mostly be in enterprise data centers or under their control in a colocation facility. While shifting work to the cloud, many are simultaneously maintaining and even expanding premium data center and Edge facilities.

In 2019, Uptime Institute asked respondents to describe the percentages of their IT in different environments. 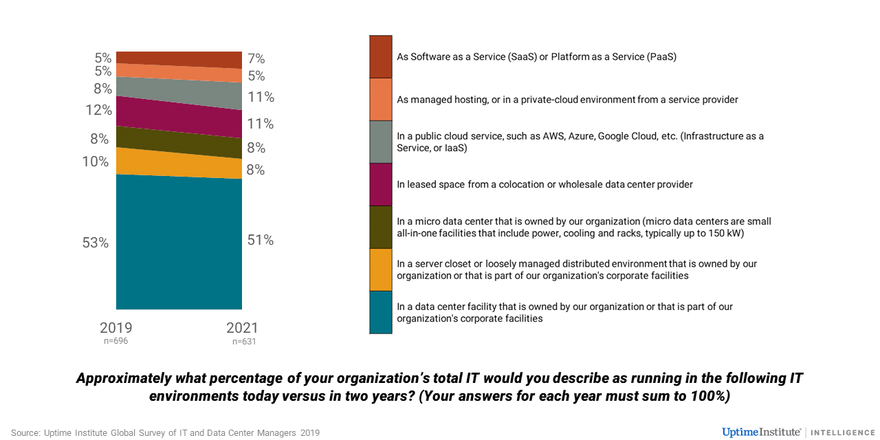 So enterprise IT’s move to the cloud is real and strong, but it is still very premature to talk of the death of enterprise IT, and the corporate data center. It’s worth mentioning that a large part of the public cloud's growth is from consumer services, such as Netflix, Uber or Snapchat.

The tipping point may come eventually: workloads that have been converted to cloud are much more easily moved off-premises. But we think the big switch is still a few years away: enterprise IT is changing and challenging, but not in terminal decline.

Public cloud operators will have to work on issues of transparency, trust, governance and service to attract IT workloads. Outstanding tools and infrastructure are not enough.