Uptime: Enterprise data centers run the majority of IT workloads

But hybrid infrastructure and distributed applications are happening, and we need to iron out the risks, says Uptime Institute survey

Despite the promised simplicity provided by the cloud and other technologies, the data center sector just keeps getting more complex, according to the Uptime Institute's latest annual global data center survey.

The majority of IT loads still run on enterprise data centers, leading to a huge set of challenges in managing the workloads across the hybrid architectures which are emerging between these facilities and the cloud. Meanwhile, power and cooling vendors are struggling to keep up with the growth in demand, and everyone is struggling to get enough staff with the right skills.

Given Uptime's work on reliability with its Tier certifications, it's not surprising the report looks closely at attitudes to availability. 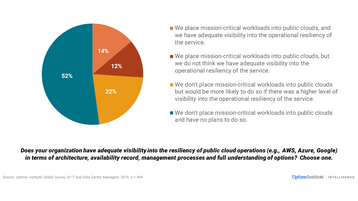 Visibility in the public cloud is poor – Uptime Institute

Privately-owned or operated enterprise data centers still run more than half of all IT workloads, according to the survey. Capacity demand in the enterprise space is still growing, too, although it is decreasing as a total percentage of the capacity, since cloud and colocation data centers are being built out faster.

IT workloads are running on a range of platforms, and a third will be contracted to external suppliers (such as cloud and SAAS providers) by 2021, Uptime predicts.

If there's a delay in adopting the public cloud more enthusiastically, it could be caused by lack of transparency by cloud providers. Uptime found that three-quarters of respondents were hesitating to put mission-critical applications on the public cloud, with many saying this was because of a lack of visibility, transparency and accountability in those services. More than twenty percent of managers said they would be more likely to place workloads in a public cloud if they had more visibility into the provider’s operational resiliency.

Even those using public cloud for mission-critical applications weren't satisfied. About half said they are taking a risk because they do not think they have adequate visibility.

Across all their applications, IT managers are changing their attitudes to availability, says the Institute. Traditionally data centers are kept reliable through "rigorous attention to power, infrastructure, connectivity and on-site IT replication," says the report, but this is changing: "Today, distributed resiliency using active-active data centers is becoming more common; 40 percent of those surveyed said they use availability zones for resiliency, a strategy that requires at least two active data centers replicating data to each other."

Managers are finding they can distribute loads reliably, according to the report: "Modern architectures have made it easier to spread work more reliably and cost effectively across multiple sites, and with proper operational processes this can reduce overall risk and improve resiliency."

Despite this - and perhaps surprisingly - outages are just as common as last year. Just over a third of respondents' businesses were affected by some sort of infrastructure outage or serious degradation of service in the past year. More than 10 percent of all respondents said they had had very tangible effects from the most recent reportable outage, citing more than $1 million in direct and indirect costs.

It's becoming more common to see outages that hit multiple data centers, and 60 percent of respondents said their most recent significant data center outage could have been prevented with better management/processes or configuration discipline. 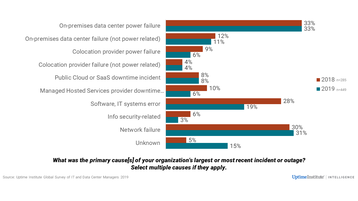 Power is the biggest cause of outages: but higher level issues are increasing – Uptime Institute

“This year’s survey shows that the data center sector is finding it challenging to manage complexity," said Andy Lawrence, executive director of research, Uptime Institute. “Most organizations have hybrid infrastructure, with a computing platform that spans multiple cloud, co-location and enterprise environments. This in turn, increases application and data access complexity.

He says the approach ought to be liberating, as it promises agility and (when deployed effectively) resiliency. But there's the downside: "It also carries a higher risk of business services performance issues due to highly leveraged network and orchestration requirements."

Lawrence advises operators and owners to address the issues that these new architectures bring: "we need more management oversight, transparency and accountability at the business level.”

Other challenges include a level of demand that is straining the ability of traditional mechanical and electrical systems to keep pace, and an ongoing difficulty in getting staffing and kills right. Diversity is still a major issue: a quarter of managers surveyed had no women among their design, build or operations staff, and only five percent of respondents said women represented half their staff or more.

The Uptime survey was conducted in March and April 2019, with responses from 1,100 end users in more than 50 countries. It looks at two groups: the IT managers, owners and operators of data centers, and also the suppliers, designers and consultants that service the industry.