The hydrogen economy has a much bigger role than providing backup power for data centers. But it has to start somewhere

Just like carbon capture and nuclear fusion, the hydrogen economy is a massive undertaking that some see as the magic bullet to stop climate breakdown.

Like those other technologies, it's in danger of being hyped. It's running late. It's still in development, and it's going to have to progress at an almost impossible speed if it is to make a difference. 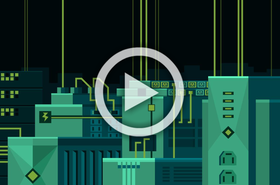 Conference Session Panel: The path to a hydrogen powered future: What are the catalysts for adoption?

It's also got the data center industry lining up to try and boost it.

H2 in the pipeline

What's so great about hydrogen? It's a fuel which can be burnt in fuel cells and gas turbines, and it can be stored and piped. What's more impressive is, when it's burnt or consumed in a fuel cell, the output is clear water. There's no carbon in pure hydreogen gas, and no CO2 emissions.

Hydrogen is hailed as the way to decarbonize any sector which absolutely requires burning a fuel - from steel making and concrete production, to long haul transport and sea cargo transport. Data centers also have their eye on it, because they need long term energy storage for power backups. They have batteries inside the building, and diesel generators outside, with a big tank of fuel at the ready. A cylinder of hydrogren or a ready pipelined supply could be the answer to decarbonizing that part of the facility.

The trouble is, environmentally clean "green" hydrogen is hard to come by. The world has a hydrogen business, but as the Economist describes it, the business is "small and dirty". We make 90 millon tons of hydrogen a year at a cost of $150 billion, but almost none of that is any good as a replacement for fossil fuels - because it is actually produced from fossil fuel. Almost all hydrogen is made by "steam-reforming" - combining steam and natural gas, a process which creates vast amounts of CO2.

Even before it can start replacing fossil fuels, hydrogen is already important. It is used to make industrial ammonia, that is used in turn to make artificial fertilisers which feed the world.

Hydrogen made from methane is known as "gray hydrogen" (make it from oil or coal and it is referred to as greay or black). In theory, you could apply carbon capture which would remove the carbon dioxide and get so-called environmentally-better "blue hydrogen". But what we really need is "green" hydrogen, made from electrolyzing water, using renewable electricity sources.

If data centers catalyze a hydrogen market, that might just kickstart the hydrogen economy the world needs

But there are other problems to using hydrogen instead of diesel. Hydrogen is a very small molecule compared with methane. It leaks easily and it is hard to transport it via the kind of pipe infrastructure people want. Stored hydrogen evaporates gradually, so applications also need a way to use that slow release of energy rather than waste it.

Microsoft has done the highest profile work with hydrogen, running several racks of servers from hydrogen fuel cells for 48 hours in 2020. And the company is actively engaged in trying to get hydrogen more fully in use.

But let's keep some perspective. In the medium term, data centers will only ever use hydrogen for backup, which is a tiny proportion of their energy needz. Data centers can afford to pay a premium which other industries can't so if they manage to seed a hydrogen economy, it will be a premium-price fuel created to meet green targets.

That industry will produce a minuscule fraction of what the world requires if we're going to decarbonize heavy industries.

But as with other green technologies, you have to start somewhere. A growing market for hydrogen back up at data centers will catalyze technology developments that could spread elsewhere. That could start to drive down prices and encourage the spread of infrastructure.

If data center investments can kick off the hydrogen economy, all power to them.