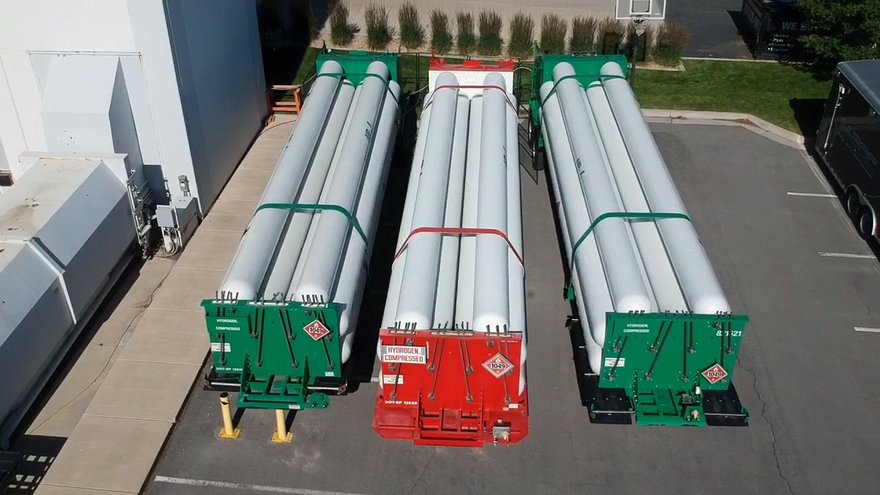 We need to get off diesel. At a large scale, diesel generators are helping contribute to the warming of the planet, serving as yet another carbon emission. Locally, they produce particulates and nitrous oxides that harm communities, and make it harder for data centers to get permits.

That’s why Microsoft, as part of a wider plan to be carbon neutral by 2030, plans to stop using diesel generators by the end of the decade. But that leaves the hyperscaler with a problem - how else to power its myriad data centers when the grid fails?

For the past few years, the company has experimented with using hydrogen as an alternative backup power. This July, that work culminated in a successful 48-hour test run, where hydrogen was used to power a row of servers without failure.

This feature first appeared in the 2020 Power supplement. Read it for free today.

“If you look at Microsoft or the other hyperscale companies, we build very large facilities and the 250kW system that we tested on for 48 hours needs to scale up to multiple megawatts" Mark Monroe, Principal Infrastructure Engineer | Microsoft

Microsoft used a 250kW proton exchange membrane (PEM) hydrogen fuel cell from the automotive market to power the 10 racks, with PEM fuel cells combining hydrogen and oxygen in a process that produces water vapor and electricity

Relying on an automotive product has its advantages - it’s one of the biggest markets for hydrogen fuel cells, so costs are falling. The products are also designed for fast acceleration, so they can give the rapid reaction time to take over from a UPS in case of grid failure.

But these products were not designed with data centers in mind, project lead and principle infrastructure engineer Mark Monroe explained. “They had never run a fuel cell for longer than six hours because they couldn’t have a fuel tank bigger than that [on a vehicle].”

To extend the usable time of the fuel cells, Microsoft brought in tankers full of hydrogen, said Monroe: “We said, ‘we’re gonna run these.’”

In a 24-hour trial in December, Microsoft discovered “some things in the fuel cells that needed slight modification, such as air filters and things like.” The company got those fixed before doing this year’s 48-hour test. “It went without a hitch,” Monroe said.

For its standard data centers, Microsoft currently keeps 48 hours worth of diesel fuel on-site, but also has refueling contracts if power outages stretch longer than that. “It’s pretty rare that that [happens],” Monroe said

“The feeling in most of the industry is that with 48 hours of backup you have plenty of time to warn your customers and they have time to migrate their tasks.”

While the company may test longer periods of running on the fuel cells, it is confident that it has passed a crucial milestone. Now, the focus is on size.

“If you look at Microsoft or the other hyperscale companies, we build very large facilities and the 250kW system that we tested on for 48 hours needs to scale up to multiple megawatts,” Monroe said. “That’s where we’re headed next.”

The company is currently seeking to procure a 3MW fuel cell, with an eye to testing it out in 2021. “And then that will take us one step closer, by running it at the scale and for the duration that we need.” That’s when the real work begins.

For hydrogen to make sense at Microsoft’s facilities, the company hopes to be part of a wider shift to the hydrogen economy.

Space agencies and the petroleum industry are already huge hydrogen users, while every day sees new hydrogen-powered vehicles roll out onto the streets. Huge projects are planned that could turn Australia into a hydrogen exporter, convert all the gas lines in the north of the UK into carrying hydrogen, and Japan has promised to become a ‘hydrogen society.’

And yet, given the vast challenge of transitioning an entire energy network, and the numerous false starts of hydrogen in the past, it has yet to reach critical mass. Microsoft envisions scenarios in which its hydrogen fuel cells could be deeply integrated into the wider community.

When liquid hydrogen is stored, comparatively small amounts boil off into gas when heat gets into the tanks. Monroe believes that it could be used elsewhere: “It could involve vehicle fueling, where we partner up with a vehicle fueling company and enable the creation of hydrogen fleets around the area for our own use or for others’ use,” he said.

“Or we might do things like capacity planning, peak shaving, or demand response and interacting with the electric grid because we’re not limited by the number of hours that we can run that generator, and so we could just use the boil off to knock off parts of our electric bill.”

More ambitiously, Microsoft could produce hydrogen on-site, pairing the fuel cells with electrolyzers so that excess renewable energy during the day “could be turned into hydrogen for long term storage, and then reconverted back into electricity by a fuel cell,” Monroe said.

For this to happen requires various industries to get on board the hydrogen bandwagon, with the company in July joining the business-led Hydrogen Council consortium, which pushes for hydrogen products and standards.

Still, even Microsoft isn’t prepared to go all-in as things stand now. “I wouldn’t say yet we’re head over heels with hydrogen, but we’re definitely investigating it thoroughly,” Monroe said.

To meet its 2030 diesel-free target, it is “pursuing several alternatives in parallel,” Monroe explained. “One of them is just simply big batteries, right? Being able to run for several hours on batteries might be enough in some locations… the crossover point is somewhere in that four to 10 hour range, where a large battery versus a hydrogen generator becomes more economically viable.”

The company will also use diesel derived from biomass, rather than fossil fuels, as it transitions to whichever post-diesel solution it picks. “So a large portion of the infrastructure will still run on an internal combustion engine that has some sort of renewable fuel [after 2030],” Monroe said.

Diesel is incredibly easy to procure and, along with biomass alternatives, it has greater energy density than hydrogen, so it won’t go away any time soon.

Still, Monroe says Microsoft is “optimistic about hydrogen and the technology. We think that probably three to five years out will be when you might see data centers deploying this at a large scale [as backup power], and there is definitely the possibility of using hydrogen as a primary power source.”

There are others who hope to use hydrogen for even more. “Using hydrogen as a coolant and as a fuel is something that is quite interesting to me as that opens up a lot of opportunities for innovation,” Dr. Victor Nian told DCD. 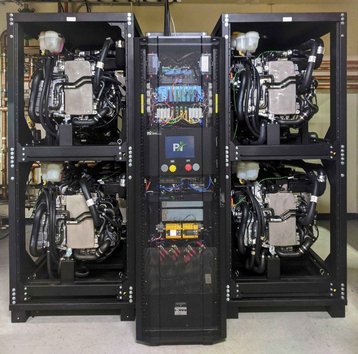 The senior research fellow at the Singapore government-funded Energy Studies Institute is fascinated by the idea of using hydrogen as a multi-energy carrier.

“You’ve already spent the energy to make it liquid hydrogen,” which needs to be at least −252.87°C/−423.17°F to liquefy at atmospheric pressure. “Now, when you use the liquid hydrogen or highly compressed hydrogen it gives you the cold energy, whether you like it or not,” Nian explained. “Whereas with water, you actually have to cool the water.”

Meanwhile, for the cold liquid gas to be used in fuel cells, it is warmed slightly - something that could instead be done by servers. “You can go from the hydrogen fuel cell, cool the data centers, and then come back to become a fuel at a reasonable temperature and then use that fuel to produce electricity to power the data center,” Nian said.

“So maybe we can achieve triple benefits - on paper this is workable.”

There doesn’t appear to be any data center company that has embraced the idea just yet, with the closest being Keppel Data Centres. Also based in Singapore, a nation with limited landmass, it is exploring building a floating data center that could use hydrogen power, and is also studying using the cooling from liquified natural gas regasification to help data centers. But all of its efforts are in a very early stage, and the company declined to comment.

Another idea that is possible, on paper, is that of hydrogen cryomagnetics. Instead of storing energy in a kinetic form in a flywheel, supercooling the system with hydrogen would mean that the copper would achieve superconductivity, so the energy could be stored in the magnetic field.

“It’s not a new concept, but is barely mentioned in the literature because the application is very, very niche,” Nian said. “But it could be super convenient because you can discharge energy from this storage at super short time intervals at a very high power.”

When asked about Microsoft’s view on using hydrogen for cooling, Monroe was reticent. “It’s possible,” he said. “We’ve looked into a couple of schemes where we might use the hydrogen for some cryogenic type cooling applications for maybe super performance or quantum or things like that.”

He added: “Definitely having more experience with cryogenics as a result of having large amounts of liquid hydrogen around will definitely help us as a company as we move into those kinds of spaces.”

That’s still a long way off. Microsoft first has to convince itself that it wants to use hydrogen - then it needs to convince everyone else. Plus, it needs to make sure that people use the right kind of hydrogen.

While hydrogen itself is a green energy storage product, the process of creating it can be less so. Currently, roughly 95 percent of hydrogen is produced from fossil fuels, emitting carbon dioxide and carbon monoxide as byproducts.

This often comes from natural gas - Keppel, for example, operates gas businesses as sister companies to its data center arm.

For hydrogen to improve things, rather than simply moving the problem downstream, it needs to be produced with electrolysis, where electricity from renewable sources is run through water to separate the hydrogen and oxygen atoms.

Once a company like Microsoft decides to shift to hydrogen, Monroe believes that everyone else will soon turn to it.

“Diesel generators are an accepted difficulty for the data center industry because they’re the best that’s available today,” he said. “But there are other folks that would like to get rid of their diesels as well. And so we think that once one of us proves out the technology, others will follow along quickly.”

Shifts to new technologies don’t happen overnight. Should they be adopted by the data center industry, hydrogen fuel cells will have to integrate with existing facilities as well as new builds.

“We’ve asked our suppliers to make this a drop in replacement for a diesel generator,” Microsoft’s Mark Monroe said.

“And so electrically, the way that we test the system looks just like the diesel gen does. And from an architecture standpoint, we want the data centers to be exactly the same, beyond the generators and storage.”

But, he noted, long term “that may or may not be the best way to do hydrogen generators.” For example, they produce direct current, so Microsoft could theoretically “shortcut some of the electric system and do a redesign that takes advantage of the way that the fuel cells work.”