Company also launches more than a dozen 0.5MW Edge locations across SA, plans dozens more before end of the year

The WIOCC subsidiary this week announced the launch of OADC Edge, its first facility. Located in Durban, the facility offers up to 5MW and 2,200 sqm (23,700 sqm) of white space. The facility will also house the cable landing for the Amanzimtoti branch of the 2Africa submarine cable. 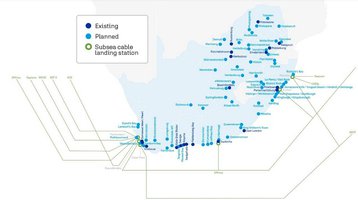 “OADC is building Africa’s Edge data center infrastructure to support clients seeking cost-effective network extension, and those who are changing their infrastructure deployment strategies to fulfill demand for content closer to the network Edge - for improved availability and premium performance - or to optimize networking and storage costs by pre-processing data locally,” Wright added.

The company’s second core data center is due to open in Nigeria later this year. Sitting on a four-hectare site in Lekki, Lagos, the $100 million, Tier III quality facility will have up to 20MW of capacity and 7,200 sqm (77,500 sq ft) of white space. The Equiano sub-sea cable will land directly in this data center. The company said the site is scalable up to 40MW.

The company previously said a third facility in Mogadishu, Somalia, is due to come online ‘before the end of 2022' but hasn’t yet detailed specifications.

In its latest press release, the company added it is planning the rollout of “over 100, 0.5MW Edge data centers” by the end of 2022, with 17 of these small Edge locations already live in South Africa, offering colocation, rooftop access, and network interconnectivity between facilities.

It said it is also planning several 2-3MW, Tier-III quality regional facilities due to come online during Q3 2022.