Westland Bunker data center in Montgomery, Texas, up for sale

Converted nuclear shelter up for sale for $38m

A nuclear shelter turned bunker data center is up for sale in Montgomery, Texas. 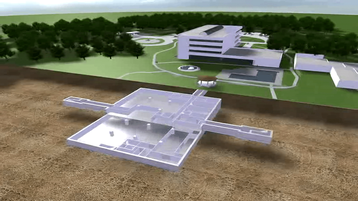 The 240,000 sq ft (22,300 sqm) property sits on 58 acres within Montgomery County. Originally built in 1981 by Westland Oil founder Louis Kung doubling as his corporate headquarters and as a fallout shelter for him as well as his family & employees in the event of any nuclear disaster or war.

The site was acquired by Curtis Development LLC in 2001 and then acquired by Montgomery LP; it was converted to a data center in 2004 and subsequently upgraded in 2008. The Bunker built a second 105,000 sq ft, five hall, 12MW data center in April 2014.

Ling-Chieh (Louis) Kung was the nephew of Madame Chiang Kai-shek, the First Lady of the Republic of China. His wife was Debra Paget, an actress that played the love interest of Elvis Presley in the 1956 western, Love Me Tender. Kung started an oil company in 1961 called Westland Oil Development Corp, which eventually went bust in the late 1980s.