It will be the first international submarine cable connection into the Northern Territory capital of Darwin. Fibre Expressway's Project 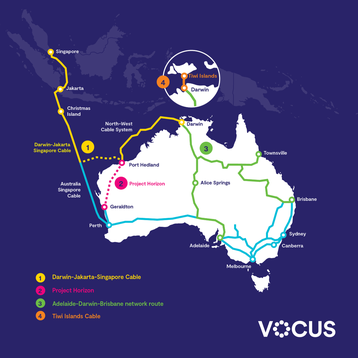 “The Territory is going digital - and there is so much opportunity for growth and jobs in this space," Northern Territory chief minister Michael Gunner said.

“The Darwin-Jakarta-Singapore Cable is a massive sign of confidence in the top end as an international provider for connectivity and digital industries.”

The DJSC cable will deliver 40Tbps of Internet capacity between Australia and Asia.

“We’ve delivered Terabit Territory - a 25-times increase in capacity into Darwin. We’ve delivered a submarine cable from Darwin to the Tiwi Islands. We’re progressing Project Horizon - a new 2,000km fiber connection from Perth to Port Hedland and onto Darwin [on land].

DJSC links to the Australia Singapore Cable, which this month recovered from a lengthy outage. The cable was broken in "multiple locations at challenging depths," and took 12 days to fix.