No meetings? What a shame

Popular video streaming service Zoom is down, in a major outage that appears to be affecting users around the world.

The cause of the outage, and the scale of the issue, is not yet known. We will update this story as we learn more. Update: There are user reports of issues with Microsoft Outlook and cloud comms company Intermedia, primarily in the West Coast of the US. 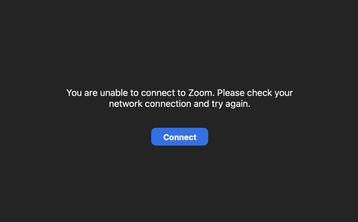 Zoom said: "We have identified the issue starting and joining meetings. We will continue to investigate and provide updates as we have them."

The service, which boomed in popularity since the Covid-19 pandemic sparked a work-from-home revolution, has experienced several outages over the past few years.

Zoom uses a number of cloud providers - when demand for Zoom exploded, an Oracle press release claimed that the service used Oracle for its cloud infrastructure, but a hasty announcement by Amazon said the majority of Zoom ran on AWS. In June that year, Zoom CEO Eric Yuan confirmed that AWS provided the majority of the new servers required by Zoom's brisk 30-fold growth in the pandemic. The company also rents space in data centers.

However, this current outage comes as Microsoft Azure notes that its "engineers are currently investigating an event impacting Azure DevOps. The event is being triaged and we will post an update as soon as we know more."

Update: Google Cloud also appears to be experiencing issues. "We are experiencing an issue with Google Compute Engine beginning at Thursday, 2022-09-15 00:00 US/Pacific. Our engineering team continues to investigate the issue." However, it appears to only be impacting Red Hat user updates.