With another four markets on the way

Vapor IO has announced it is ready to deliver its dynamic Edge service, Kinetic Grid, in 26 more US metro markets, taking the total to 32.

The Kinetic Grid is a network of 20kW container data centers, which will run distributed Edge applications, keeping them running reliably with low latency. In 2021, the company lit up service in six US cities; this week it has announced it can serve another 26 areas. It hasn't got data centers on the ground there yet, but customers can order modules which will be shipped and installed where required within 90 days, said Vapor. 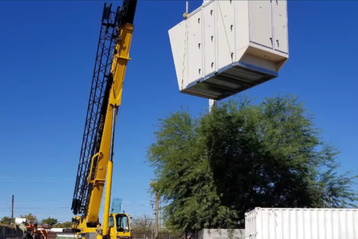 It will allow cheaper deployment of private networks, based on 5G and LTE, as well as easing the delivery of Edge services on those networks. "Private networks are in a race to establish momentum as competition gets increasingly fierce," said Vapor's release. 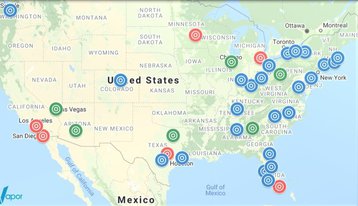 The 'near premises' Edge

The platform also addresses the issue of "near premises" applications - services that could traditionally only run in on-premises networks because of performance or security. As organizations move their IT to the cloud, these applications can be stranded in legacy facilities or else run on unsuitable cloud platforms. "Because Vapor IO’s Kinetic Grid offers on-premises performance and security, it frees enterprises to migrate more of their on-premises workloads into near-premises environments with public or private clouds," Vapor claims.

It's also useful for new applications being run as-a-service. One Vapor partner, Hypersive, is using the Kinetic Grid to deliver video management and video security on-demand.

Vapor's "just in time" delivery means that a lot of time-consuming work is handled up front, including signing land leases, laying concrete foundations, and digging fiber laterals. The actual deployment of the data center can then be done very quickly.

“Vapor IO has a multi-year lead in providing production-grade infrastructure for Edge-to-Edge computing, and we’ve been working tirelessly to meet demand and bring the Kinetic Grid to additional markets,” said Cole Crawford, founder and CEO of Vapor IO. “Our Kinetic Grid platform is enabling new use cases with new economics, reducing the time, cost and complexity of our customers’ multi-market edge deployments. We’re thrilled to announce the availability of the Kinetic Grid in 32 US markets as of today.”