Vapor IO, along with VMware and network provider Zayo, has launched a platform to make Edge applications cheaper and more reliable.

The Kinetic Grid is a development of Vapor's Kinetic Edge architecture, which links data centers across the US to make distributed Edge applications faster and more reliable. It now has access to Zayo's dark fiber network for underlying bandwidth. On top of the Kinetic Edge, VMware is running its Telco Cloud platform, to support a multi-cloud services grid.

That's a lot of buzzwords, but the bottom line seems to be an automated service that manages applications across a grid which Vapor has promised will eventually cover 36 US cities. This will prioritize applications which need low latency, and adapt to local infrastructure failures. The companies involved told DCD it's also the first practical outcome of the Open Grid Alliance, a recently-launched group led by Vapor and VMware, which hopes to update the Internet to better support low-latency Edge applications. 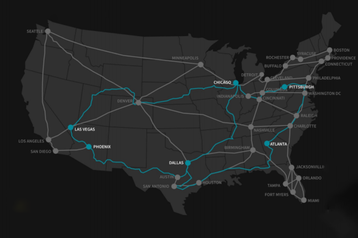 "The networks of yesterday were architected for very different kinds of workloads," said Cole Crawford, CEO of Vapor IO. "Applications have evolved over the last four decades; networks have not evolved. We have the technology and capability to fix that broken underlay network, to make it even more reliable and secure. The multi-cloud services grid is really about eradicating those deformities in the underlay."

The Kinetic Grid, like previous Vapor IO offerings, is based on instrumenting the hardware, and offering real-time information through the Synse (formerly OpenDCRE) interface. This information is fed into the VMware platform, and gives it better control over where and how applications are run, according to Cole, and VMware VP of product marketing Stephen Spellicy.

VMware's Telco Cloud platform is for telecoms customers modernizing and virtualizing their networks to allow more services and integrate 5G, Spellicy told DCD.: "A high performance, multilocation. highly-engineered layer 2-and-up network with telemetry is what you get from the Kinetic Grid," he said, adding that VMware would offer this to its enterprise customers: "This gets offered to enterprise customers who want to have highly reserved, high-performance edge computing resource available for whatever applications and data they want."

In a simulated demonstration, Crawford, Spellicy, and Vapor CMO Matt Trifiro showed applications running on resources in Pittsburgh and Atlanta. The Grid is "intent-based" with applications labeled according to their requirements and intentions. A radio access network (RAN) needs low latency for machine-to-machine communications, while a video conferencing application had less stringent requirements because human reaction times are slower.

When Crawford simulated the loss of a data center in Atlanta, the Kinetic Grid automatically shifted applications like RAN onto nearby availability zones, but allowed video conferencing to move further because a delay of a few milliseconds would not affect user experience too badly: "Because it is not latency-critical, we can restart video conf way up in Pittsburgh," said Crawford.

The Kinetic Grid is currently available in four cities - Atlanta, Chicago, Dallas, and Pittsburgh - with Las Vegas and Phoenix due to follow shortly. Adding a location to the Grid requires a shipping-container sized Vapor IO Edge data center to be installed there, and Trifiro predicts this should be done by the end of 2021 for nearly all 36 of its target US cities: "We're less than a quarter from Buffalo, and most markets will have a Vapor Edge module ready by end of year."