US still leads in Top 10 data center markets, but Sydney surges to No. 3

Northern Virginia and Chicago have taken the top two spots in the world's top 10 data center markets, but US dominance has taken a knock as Sydney enters at number three in a subjective list prepared by Cushman & Wakefield. 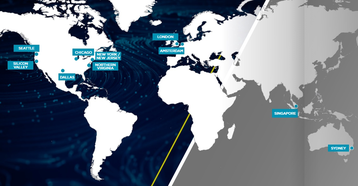 During 2020, data center construction "skyrocketed" partly due to changes driven by the pandemic, according to Cushman & Wakefield executive managing director Dave Fanning. In that time, US dominance seems to have declined, according to the new report.

In the group's 2020 report, all of the top five markets were in the US. Since then, Singapore has risen one place to number five, and London and Amsterdam have switched places - with London rising to number seven, and Amsterdam falling to tenth place.

Northern Virginia keeps the top spot because of its "largest market size, robust fiber, attractive incentives, low-cost power, and largest development pipeline", the report explains. Although land prices have gone up in the commonwealth, it says, "large, well-connected sites remain a fraction of the cost of other densely populated global markets". Chicago has copied many of these benefits.

Sydney has made a sudden appearance on the list, because of "a year of major new development announcements and an ongoing transformation of much of Australia's government IT infrastructure".

Both Singapore and Amsterdam have weathered data center moratoriums during the 2020 period, but remain as a testament to their "strong existing markets, dense fiber, and array of available services," says the report, adding "as other markets continue to grow, it will remain imperative for both to find solutions for future development," suggesting they may need new forms of power generation and multi-story construction.

In the US, Dallas dropped from number three to number six - along with Seattle, it's been criticized for over-supply. Both markets remain on the list because they have low taxes, cheap power, and good fiber.

“The 2020 pandemic accelerated the change in corporate IT strategy, as companies rapidly shifted to the cloud," said Fanning. "Continuation and optimization of this shift will continue throughout the next several years, creating further emphasis on cloud services availability and connectivity across platforms."

The report's methodology is to rank data centers from a long list of 48 markets, according to various factors, and then combine those rankings according to a set of weightings. One set of factors, "real estate and physical", includes the pipeline, environmental risk, land price, and vacancy. A second set, "ecosystem advantages", includes availability of cloud and fiber, market size, sustainability, and smart cities. The third set, "political and regulatory review", includes incentives, political stability, power cost, and taxes. Cushman & Wakefield says it looks at 1,189 data centers and 30 research sources.

Other locations that scored well in some factors included Dublin, Oslo, Lagos, Frankfurt, Berlin, and Paris.

Seoul entered the long-list for the first time, with around 300MW of capacity. The report sees it as a hotspot, along with Zurich, Melbourne, and Madrid. Cushman & Wakefield lists ten more "markets to watch" that could make the long-list next year: Nairobi, Stockholm, Cape Town, Moscow, Athens, Abu Dhabi, Santiago, Chennai, Kuala Lumpur, and Vienna.