University of Innsbruck puts a quantum computer in two racks

Taking quantum systems out of their vast laboratories, and into conventional data centers?

Physicists ad the University of Innsbruck have built a prototype ion trap quantum computer in two standard 19in server racks.

The project uses tiny components provided by Alpine Quantum Technologies (AQT), a spin-off from the University, and a leader in the race to build quantum computers using the "ion trap" technique. The system is part of a EU flagship quantum research program called Aqtion, and could soon lead to quantum computers which can be deployed in data centers, according to the researchers. 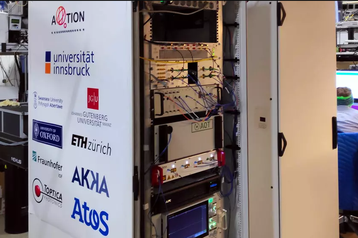 "Our quantum computing experiments usually fill 30- to 50-square-meter laboratories," said Thomas Monz of the University of Innsbruck. "We were now looking to fit the technologies developed here in Innsbruck into the smallest possible space while meeting standards commonly used in industry."

The trapped ion method is an approach to making the "quibits" required for quantum computing and could allow practical systems at room temperature because it does not need very low temperatures to create the superconductivity required by techniques such as Google's.

In 2019, Google used superconductivity in a 53 qubit system to claim so-called "quantum supremacy", and has since promised to produce commercial quantum systems by 2029. Since then, companies such as IonQ and Honeywell have made big advances using the trapped ion method.

The Innsbruck system uses ion traps in a vacuum chamber, which have been shrunk by AQT to a fraction of their previous size. AQT responded to a call from the German government for a demonstration of quantum computers with 24 fully functional qubits. The Innsbruck quantum physicists have already achieved that, and have now got 24 individually controllable qubits in the two-rack prototype - but plan to go further.

“By next year, we want to be able to provide a device with up to 50 individually controllable quantum bits,” said Monz.

“We were able to show that compactness does not have to come at the expense of functionality,” added another Innsbruck researcher, Christian Marciniak.

The project is part of Aqtion, an EU flagship project designed to build a European ion trap quantum computer. The project is financially supported by the Austrian Science Fund FWF, the Research Funding Agency FFG, the European Union, and the Federation of Austrian Industries Tyrol, among others.

Other components were produced by the Fraunhofer Institute for Applied Optics and Precision Engineering in Jena and laser specialist Toptica Photonics in Munich, Germany.