Fuel cells that do a diesel generator's job

Toyota and the US Department of Energy are working on a prototype 1MW fuel-cell power generation system which could eventually be a drop-in replacement to a conventional generator. 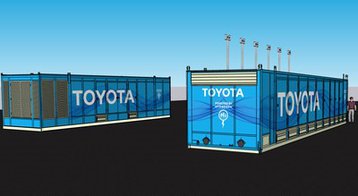 Data centers are looking for ways to replace diesel generators that run on fossil fuel, and hydrogen fuel calls are a strong contender, although the energy source (H2) and the fuel cell modules are currently much more expensive than conventional diesel generators.

The three-year, $6.5 million collaboration is part-funded by DOE's Hydrogen and Fuel Cell Technologies Office as part of the DOE's effort to establish a market for clean hydrogen across multiple sectors.

The 1MW fuel cell system being built at NREL will integrate multiple Toyota fuel cell modules into a larger system to provide "responsive stationary power" - i.e. backup power that can be delivered swiftly.

NREL has already funded a previous research project, involving HPE and Daimler, which investigated using automotive fuel cells to power a data center, and successfully integrated a 70kW fuel cell with IT racks (PDF). According to the NREL report on that effort, Daimler and HPE planned to take this on to a 250kW version and eventually to 3MW, but the project ended in 2020: "Further testing and analysis were cut short when the project was decommissioned in July 2020 due to Covid and lack of secured funding to operate it further."

The new Toyota system moves to a larger scale, and will be capable of direct current and alternating current output.

The Toyota fuel cells, developed originally for the light-duty fuel cell electric vehicle market, are being integrated by Telios, for delivery to NREL. Toyota has developed an integrated control system to operate the fuel cell modules for maximum efficiency and system life.

Much like Microsoft and Plug Power, the Toyota team plans to simplify and streamline the design so it can be produced in large numbers as a drop-in replacement for diesel generators.

"Achieving carbon neutrality requires all of us to explore new applications of zero-emission technology, including how that technology will integrate with other systems, which the project with NREL will identify," said Christopher Yang, group vice president, Business Development, Fuel Cell Solutions, Toyota. "The application of our modules in deployments of this magnitude shows the scalability of Toyota's fuel cell technology, whether it is a single fuel cell module for one passenger vehicle or multiple systems combined to power heavy-duty equipment."

NREL researchers will be stretching the system, push operational boundaries to identify performance limitations and degradation over time, which should produce valuable real-world data which fuel cell developers can use in future applications. The project will also assess how the system performs when integrated with energy storage and renewable energy generation systems, such as solar photovoltaic and wind.

"We will study the scaling of PEM fuel cell systems for stationary power generation to understand what the performance, durability, and system integration challenges are," said Daniel Leighton, an NREL research engineer and principal investigator on the project. "This fuel cell generator system also creates a new megawatt-scale fuel cell research capability at NREL."