A new supercomputer has been installed at National Supercomputer Centre at Linköping University in Sweden.

Based on the Nvidia DGX Super Pod computing architecture, the Berzelius system can deliver 300 'AI petaflops' of performance (FP16), making it twice as fast as Sweden’s current top computer, and will be used for AI and Machine Learning research.

“Our new supercomputer is a powerful addition to the important research carried out into such fields as the life sciences, machine learning and artificial intelligence," says Jan-Ingvar Jönsson, vice-chancellor of Linköping University. 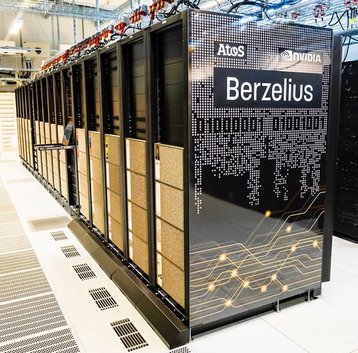 The system is named after Swedish scientist Jacob Berzelius, who hailed from the Östergötland region where Linköping is located. Along with discovering silicon, Berzelius invented the system of chemical notation, for example using O for oxygen or Fe for iron.

The new supercomputer was made possible through a donation of €29.5 million ($35 million) from the Knut and Alice Wallenberg Foundation. Researchers who will primarily work with the supercomputer are associated with the research programs funded by the Foundation, such as the Wallenberg AI Autonomous Systems and Software Program (WASP).

“We are extremely happy for research in Sweden that the Wallenberg Foundations have been able to contribute to the acquisition of world-class computer infrastructure in a location that supplements and reinforces the major research initiatives we have made in recent years in such fields as AI, mathematics and the data-driven life sciences," said Marcus Wallenberg, vice-chair of the Foundation.

“Research in machine learning requires enormous quantities of data that must be stored, transported and processed during the training phase. Berzelius is a resource of a completely new order of magnitude in Sweden for this purpose, and it will make it possible for Swedish researchers to compete among the global vanguard in AI”, added Anders Ynnerman, professor of scientific visualization at Linköping University and WASP program director.