Stockholm Exergi, the Swedish utility which is a partner in the Stockholm Data Parks green data center complex, has cleared a hurdle to get EU funding for a carbon capture and storage scheme. 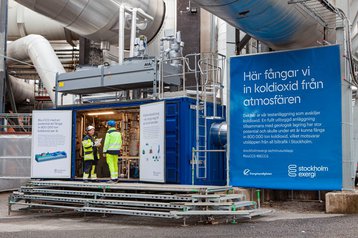 With BECCS in place, the CHP system would have negative emissions, as carbon captured by trees would not be released into the atmosphere. The project has now cleared the final selection hurdle to receive support from the European Innovation Fund, a €20 billion ($22.6bn) money pot for low-carbon technologies. Exergi plans to use that support to develop Bio-CCS for a wider market.

"With Bio-CCS we are able to 'vacuum clean' the atmosphere from carbon dioxide using nature's own process, photosynthesis," Erik Rylander, Head of Stockholm Data Parks at Stockholm Exergi explained to DCD in 2020. "Trees absorb CO2 as they grow. When we make use of the energy in the wood in our bio-CHPs, capturing and storing the CO2 in the flue gases using Bio-CCS, we are in fact taking CO2 out of the atmosphere. The carbon sink that we create we plan to offer to the market."

[email protected] should be running in 2025, and will have a capture capacity of close to 800,000 tonnes of biogenic CO₂ per year. Exergi is working out contracts to have the captured carbon transported and permanently stored n sub-sea geological aquifers or in depleted oil and gas fields in the North Sea. These contracts should be in place by February 2023, the company has said.

“[email protected] was the only BECCS project selected by the EU Commission," said Anders Egelrud, CEO of Stockholm Exergi. "On behalf of Stockholm Exergi, I extend my thanks to the EU Innovation Fund for their support, a vital component of maintaining our project timeline. We look forward to continuing our important work to accelerate the deployment of negative emissions, as recommended by the IPCC, in order to decisively contribute to limiting global warming to 1.5°C."

The project is based on Exergi's input, along with EU funds and Swedish government aid, at a rate to be set in 2022 through a reverse auction process. Exergi expects it will provide revenues from selling negative emission rights to the voluntary carbon market in the form of carbon removal certificates with permanently geological storage. "All of these funding streams will be required to ensure a successful project launch," the company says [Google translation]."

The carbon capture and liquefaction process generates heat, which will be recovered and input to the Stockholm Exergi district heating system.

[email protected] is Stockholm Exergi’s first large-scale biogenic carbon capture project: the company expects to develop further BECCS facilities at other bio-CHP and waste incineration plants after 2030. The potential total capture capacity could reach up to 1.7 million tonnes of biogenic CO₂ by 2045.