The cable landed in Jeddah on August 25

STC Group has launched its 'Saudi Vision Cable,' a high capacity cable with four landing stations along the Red Sea coast of the Kingdom of Saudi Arabia (KSA).

The Saudi telco confirmed that its subsea cable has reached its first landing station in Jeddah, with the project 'inspired' by the nation's Vision2030, which looks to reduce Saudi Arabia's dependency on oil and open up other areas of its economy. 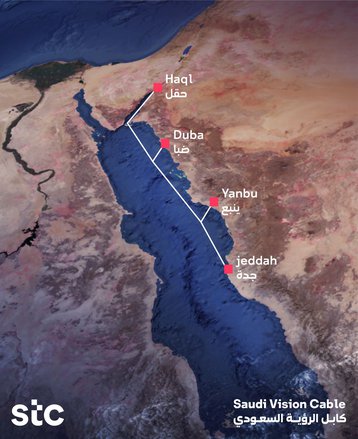 The cable spans 1,100km and will be able to provide speeds of up to 18Tbps per fiber pair, with 16 fiber pairs through four landings including Jeddah, Yanbu, Duba, and Haql.

"This achievement reflects our comprehensive strategy that aims to diversify the Group’s investment opportunities and support digital transformation in the KSA by boosting the digital infrastructure," said STC Group CEO Olayan Alwetaid.

"The cable will provide digital connectivity services for corporates and individuals between the KSA and the continents by building a regional digital hub connecting the continents of the globe and help meet the needs of companies and customers via an integrated digital ecosystem.”

This new cable is one of the submarine cables that links to the MENA hub, which links three continents, connecting Europe to Asia. It joins 16 other cables invested by STC that are located between the east and the west of the country.

The cable is privately owned by STC and supplied by Alcatel Submarine Networks (ASN).

Earlier this year STC Group outlined its intentions to spin-off its data center and cable business into a separate subsidiary, with this new company valued at SAR 2.1 billion ($559.7m).