A start-up says it will provide an Edge network with sub-millisecond latency across the UK, using 20-foot containerized data centers.

SmartEdge DC says it has chosen locations in major towns in each of the UK's 11 regions, each of which can host up to ten of these containers, each holding ten 21kW racks. As the network spreads, it will add multiple "E-Pops," locations with a single container. SmartEdge says it will launch all 11 regional DCs, and 11 E-Pops on a single day in Q3 2020. 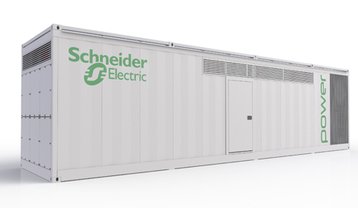 “We are following the model of the cell network," SmartEdge CEO Peter Hewkin told DCD. "We'll start with a physical working model of 22 containers. Eleven will be on sites where we can expand."

The service is described as Virtual on Premises (VoP) Edge gateways, and the containers have been specified with Schneider Electric to include power and cooling in the build. SmartEdge is finalizing a demonstrator installation at Canary Wharf in London.

Despite promising low latency, Hewkin told DCD that the network problem is more about congestion and the energy demands of moving data around, than the speed of light. The regional Edge data centers will start with one container and can expand to ten giving a total of 100 racks and 2100kW. They will have diverse power mains electricity supply and onsite standby generators.

The containers can be subdivided, so customers will be able to rent a whole one with ten racks, or else four or six racks.

The E-Pops will be part of a local mesh, so their reliability will be delivered via distribution, instead of through backup generators.

SmartEdge says it will take 1,000 locations to fully cover the UK, but it has identified 30,000 potential locations for these, which have electricity and fiber connections and potential for heat reuse - the company plans to offer the waste heat from these facilities for "public benefit."

While some Edge deployment models have proposed placing micro data centers at cell towers, Hewkin says SmartEdge is doing "the reverse." He agrees with analysts who say that most cell tower locations do not have sufficient power available to add micro data centers, and observed that 5G will require many more tower locations. SmartEdge will place its containers and then offer connections to nearby 5G masts as they arrive.

Hewkin's links with Schneider Electric's modular systems go back some while. In 2009, he was involved in an effort to build a very large data center in Scotland, based on Schneider's APC containers, which ultimately came to nothing.