Japanese bodies for space and science have sent high-definition images over a 100Mbps Ethernet downlink from the International Space Station (ISS), with the help of Sony.

The bidirectional laser link, dubbed SOLISS (Small Optical Link for International Space Station) between the ISS and a ground station, was set up by the Japan Aerospace Exploration Agency (JAXA), along with the National Institute of Information and Communications Technology (NICT) and Sony Computer Science Laboratories. 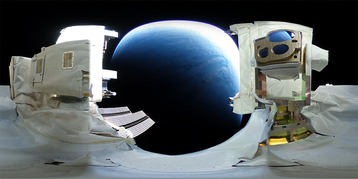 JAXA and Sony aim to enable real-time data communication systems between satellites, and from satellites to the ground.

Lasers can be better than radio waves for this purpose, because of the physical ability to scale the bandwidth. The use of the Ethernet protocol and established optical disc technology means that the resulting technology can be upgraded to very high speeds and deployed affordably for low latency inter-satellite and space-to-ground communications in the future.

The Japanese bodies bean their collaboration in 2016, with research and development beginning in 2017, and the announcement last week follows several months of deployment effort.

The system was shipped to the ISS by rocket in September, and installed on the Kibo’s exposed facility. Tests and adjustments were made about once a week, weather permitting. On October 25, 2019, an optical downlink (orientation control) from SOLISS to the optical ground station was established and, on March 5 this year, bidirectional laser communications were established with the ground station using a 1.5 µm laser. The first HD images were received on March 11.

The current series of experiments will refine the stability of the link, and continue to June 2020. 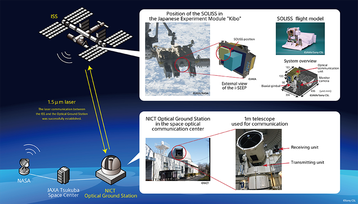 “The Japanese Experiment Module (JEM) "Kibo" of the International Space Station (ISS) is a permanent experimental facility located in low earth orbit about 400 kilometers above the earth," said Hiroshi Sasaki, VP and director for human spaceflight technology at JAXA, who added that the downlink could expand the civilian use of the ISS: "I anticipate this technology, which originated from our Space Exploration Innovation Hub Center program, will serve as the basis for realizing mass-data communication with orbiting spacecrafts around the earth in future space exploration such as to the Moon and Mars.”

Naoto Kadowaki, vice president of NICT, said: “We hope that this technology will be used not only in conventional geostationary satellites, but also in broadband satellite communication systems using Low Earth Orbit satellite mega-constellations, which are currently under construction. I hope that this technology will reach to the level for commercialization in the near future.”

Hiroaki Kitano, president of Sony CSL, remarked: “The optical disc technology that Sony has cultivated over the decades controls light at a very short distance of 1 mm or less, but this time it has been proved that this technology can be applied even in long-distance, between space and ground. This technology is not only high precision and low power consumption, but also provides new opportunities due to its small size and mass production technologies."