The US data center provider announced earlier this week that Regis Malloy would join the leadership team as chief strategy officer, and Steve Weaver as chief revenue officer. 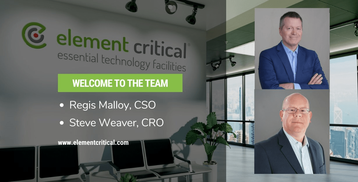 Element Critical is in the process of growing its data center portfolio. In May 2022, the company completed the expansion of its Houston data center that was acquired from Skybox the year previously, and in September 2021 the company acquired an Austin data center from Vxchange, also with plans to expand.

Ken Parent, CEO at Element Critical, said of the new appointments: "Our company is extremely excited to have these seasoned veterans join the executive team. With a diverse and talented leadership team in place, the foundation is laid to intensify growth through site expansion, acquisition, operational enhancements, and advancing IT solutions to benefit our customers, employees, shareholders, and the communities we serve."

Regis Malloy has previously worked for companies such as Sabey Data Centers and CoreSite, and has over a decade of experience in the data center industry.

It is not only the Austin data center that Element Critical acquired from Vxchange. Steve Weaver previously served as the senior vice president and chief sales officer for Vxchange. Weaver departed the company in May of this year.

Vxchange ceased operations entirely in August 2022. The company began selling off sites over the last year, including a significant sale of seven Vxchange data centers to H5 data centers as confirmed in January 2022.