With 21 petaflops of power, 678TB of RAM memory, 2,016 GPUs, and a 400GB/s Internet link, Pegasus will be the most powerful supercomputer in Latin America.

Construction is underway, with operations at the Vargem Grande facility expected to commence in December 2022. 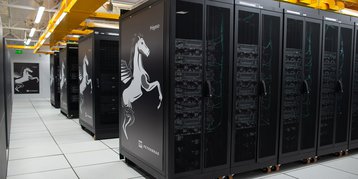 Petrobras is a state-owned multinational corporation working in refining, producing, and distributing a variety of petroleum products including crude oil, natural gas liquids, and biodiesel.

The new supercomputer will bring the company's current processing capacity from 42 to 63 petaflops and will be used for the processing of geophysical and geological data, an important aspect in enabling the company’s programs such as the EXP100 effort for using data in exploratory projects, and PROD1000 which aims to reduce the time to start production in a field.

Over the last few years, Petrobras has invested heavily in supercomputing. In June 2021, the company announced that operations were commencing at the Dragão supercomputer, which remains the region's most powerful until the introduction of Pegasus.