Petrobras begins operation of Dragão supercomputer, most powerful in LATAM

Brazilian oil and gas company Petrobras has begun operation of its new Dragão supercomputer, and claims it to be the most powerful in Latin America.

The state-owned company said the system has 200 terabytes of RAM (Random Access Memory), a network of 100 gigabits per second, and a weight of 20 tons. The company didn’t provide further specification details. 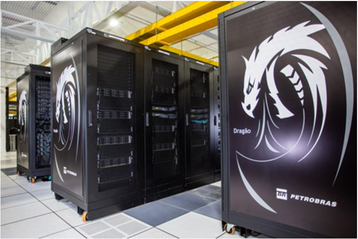 First announced late last year, the assembly process took about three months. The company said the new system is more powerful than the two biggest supercomputers in Latin America – Atlas and the Fenix, which also belong to the oil giant – combined, which would mean the new system has more than seven petaflops of processing power.

“The dragon, the largest supercomputer in Latin America, reinforces our strategy of providing more economy, agility, security and resilience to our operations, increasing the data processing capacity to support the business and add value to Petrobras,” said Petrobras director of Digital Transformation and Innovation, Nicolás Simone.

Simone added the company has put nine supercomputers into operation in the last two years and the company aims to reach 40 petaflops of capacity by the end of the year, in addition to added cloud capacity.

“With the evolution of the geophysical data processing capacity, we have reduced the risk in E&P projects and we are able to better scale the projects, which brings great savings, and even better position the wells, increasing the exploratory success rate. This is competitive intelligence,” said the director of Exploration and Production at Petrobras, Fernando Borges.

Both Petrobras’ Atlas and Fenix systems on the Top500 list in 65th and 97th place respectively as of November 2020; Atlas debuted last year is an Atos manufactured system powered by Intel Xeon Gold capable of 4 petaflops. Fenix, another Atos Bull system, entered the list in 2019 and has a Linpack performance of 3 petaflops.