The Kildare Nationalist reports the Kildare County council this week voted to re-zone the land in the town – around 20 miles southwest of Dublin – as part of an update to the Naas 2021-2027 Local Area Plan.

The plan added specific zoning on two sites in the town the council said were considered suitable for extensive land development, and would only consider data center developments on those plots.

“This Plan promotes Naas as a sustainable international destination for ICT infrastructures such as data centers,” reads the document.

The two sites – reportedly 91 and 106 acres – are located at south of the Caragh Road and at Jigginstown/Newhall respectively. The plan also aims to develop a district heating scheme which could reuse the excess heat from the data centers to warm businesses, residences and other buildings in the area. 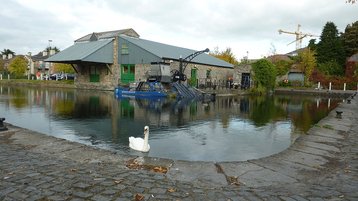 “These lands are identified exclusively for data centers, to ensure the location of these types of proposals are controlled proximate to serviced areas of the county,” the area plan reads. “The Council will not consider any alternative use on these lands, other than those associated with data centers.”

While no official planning permission has been submitted, it seems the move might be to encourage a prospective developer already considering the town for a new data center. KildareNow reports that planning consultants John Spain & Associates were investigating building a data center in the town at the end of last year on behalf of an unnamed client.

In a recent consultation, EirGrid said it might require new energy-demanding projects such as data centers to be built near to renewable energy sources in future, moving data center developments away from Dublin and towards the west coast. The Commission for Regulation of Utilities (CRU) has since told national grid manager EirGrid and ESB Networks to prioritize applications for data centers in regions where power supplies are not struggling, with Eirgrid warning it could not approve grid access for more than 30 data centers currently being proposed as a result.

The Irish Government has set a target that 70 percent of Ireland’s electricity will come from renewable sources by 2030. In its Generation Capacity Statement 2020-2029, EirGrid projects that demand from data centers could account for 27 percent of all electricity demand in the country by 2029, up from 11 percent in 2020.