Apple has seemingly re-started its efforts to build a data center in Athenry, Ireland.

Apple this month submitted an application to Galway County Council for an extension to its planning permission on the site and, says it aims to have built a data center on the site by the end of the extension period.

The story that just won't die 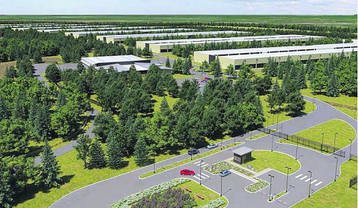 The news comes as an about-face for what had thought to have been a long-abandoned project. Apple bought the land for around $15 million in 2014. Though its plans to build a data center by 2017 were approved by the local council, appeals kept bringing the case back to the Irish planning board (An Bord Pleanála) and the Commercial Courts.

The company’s plans led to some protests (as well as marches in favor of the project), and environmental campaigners that appealed to stop the development. Other challenges, a shortage of judges, and court issues repeatedly delayed the project.

Apple subsequently abandoned its plans in 2018 and put the land up for sale in 2019, despite Ireland’s state head Taoiseach Leo Varadkar promising to "do anything" to get it back on track. No buyer was been found and the land was recently reported as still for sale. Following the lengthy failed process, Ireland revamped its planning process for data centers to make it faster.

Apple’s original planning permission for the site is due to expire in September 2021. The new application sees the Cupertino company wishing to extend that permission until November 2026.

“Due to delays associated with the judicial processes initiated after the relevant planning consent issued and, more recently, the complications over the last year... arising from the Covid-19 pandemic, the subject development has not been brought to fruition,” reads the application.

“It is anticipated the development will be completed within the extension period sought.”

County planners are due to issue a decision in August.

Galway East TD Ciaran Cannon told the Connacht Tribune that the IDA and Tanáiste have been liaising with Apple in recent months to show the Government is still in full support of the project. Cannon said the development gives hope that the data center is still a possibility, and could play a large role in the future of the region.

Earlier this week, Sinn Féin Galway East representative, Louis O’Hara, told the Galway Advertiser that the 500-acre parcel of land should be purchased by the State and put to use.