Open Compute Project (OCP), the open source hardware group created by Facebook to share designs for hyperscale hardware to the data center community, has announced that Google has taken a seat on the board.

Google first joined the OCP in 2016, and has helped develop OCP technology designs, including tbe Open Rack standard, designed to deploy high density servers in a smaller footprint. OCP announced at its virtual Summit yesterday, that Google is now an Executive Member, which grants it a seat on the board of directors, to be occupied by Parthasarathy (Partha) Ranganathan.

Microsoft's Kushagra Vaid also joins the OCP board, in another announcement at the Summit which was held virtually due to the Covid-19 pandemic. 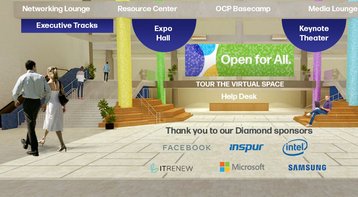 This year's OCP Summit has taken place completely online, with a virtual program of presentations that will remain available and free to access for a year.

"I'm excited about the increasing engageement between Google and OCP, and I'm personally looking fo4rward to contributing," said Dr Ranganathan in the Summit keynote. Ranganathan was a chief technologist at HP Labs before moving to Google, and is named on more than 100 patents, having worked on projects has worked on projects including energy-aware user interfaces, heterogeneous multi-cores, power-efficient servers, accelerators, and disaggregated and data-centric data centers.

Kushagra Vaid has been involved in OCP for several years and replaces Mike Neil on the board. He is responsible for cloud hardware infrastructure at Microsoft’s Azure Division, and has also been a frequent presenter at DCD's events.