IT services and infrastructure company NTT has announced its working on deploying a private 5G network expansion for the city of Las Vegas.

This private 5G network will be the most extensive private network in the country, according to NTT. 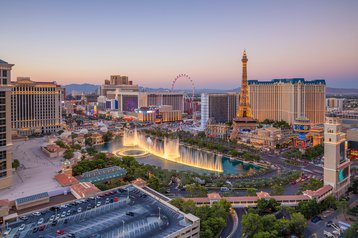 The company announced the plans during the Mobile World Congress (MWC) 2022 event in Las Vegas, Nevada.

NTT says the network will serve as an open platform available to local businesses, government, and educational institutions for deploying solutions to improve the everyday experience of the city for citizens and visitors.

This network will extend across public spaces, which is unlike most Citizens Broadband Radio Spectrum (CBRS) deployments, which are in-building or industrial. The network will also be open to third-party APs and end-user devices.

"The City of Las Vegas network will drive innovation and be a model for cities and businesses worldwide. Once implemented, it will be the largest open, municipal network CBRS deployment in the US,” said NTT Ltd Group EVP of new ventures and innovation Shahid Ahmed.

“With the support of NTT’s bespoke services, local organizations can use their own devices and develop their applications on the network. City-wide, residents and visitors will receive improved connectivity, safety and security, and access to healthcare and other critical services.”

NTT is working alongside its partners to double the amount of network access points (APs) throughout Las Vegas, while the private network will cover the entirety of the city.

Fierce Wireless reports that the network is currently being tested ahead of a launch in the coming weeks.

The city of Las Vegas has been working with NTT since 2018, with NTT leveraging its smart solutions to enhance safety and traffic congestion in the city using sensors, IoT, big data, and predictive analytics.

The deployment of private networks has become a common theme in recent times, with the Global mobile Suppliers Association (GSA) noting in its recent Private-Mobile-Networks August 2022 report, that 66 mobile network operators are involved in such projects, across 70 countries/territories.

In total, the report identifies 889 organizations deploying these private networks across more than one location, which are mainly made up of LTE and 5G Private Mobile Networks (PMN).

Since June of this year, the number of these PMNs has grown by nearly 100, up from 794. LTE technology accounts for 57 percent of these deployments -- with 672 customers using this -- and 5G technology deployed by 354 firms. However, 5G Standalone currently accounts for just 37 deployments.

An example of a recent private network deployment is Speedcast's private LTE network for a Brazilian energy provider, which has been supported by vendor Ericsson.