A disused power plant in New York has been recommended to be turned into a data center.

The NRG Power Plant in Dunkirk, New York, operated from the 1950s until 2015. Originally known as the Niagara Mohawk Power Plant, the 600MW plant was officially mothballed in 2016, with the decommissioning process beginning in 2020.

The City of Dunkirk and Chautauqua County recently released a new report looking into the potential new uses of the decommissioned Power Plant. 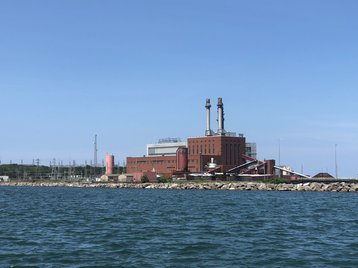 One of the seven potential uses for the site is as a data center. The report noted that this use will reuse existing infrastructure, have a lower environmental remediation cost, strong renewable energy component, and there are successful comparable projects in other parts of New York. However, it acknowledged a high amount of power and investment cost would be necessary.

Consultants Bergmann Group said either a data center or a mixture of industrial use and data center were the preferred re-use concepts as they can reuse some existing buildings while also make potential use of solar, biomass, and battery storage at the time same. Long-term job creation opportunities, as with many data center projects, would be low.

“A data center on this site could potentially be paired with renewable energy sources, such as solar and wind. Battery storage could also be utilized on this site to use and store energy generated from these renewable sources.”

Other potential uses for the site could include conversion from coal to a natural gas power plant; general industrial development; battery storage site; interconnect for future offshore wind projects on Lake Erie; microgrid development; or a complete $38 million ‘clean slate’ where all current buildings are demolished and environmental remediation work is carried out in order to create more re-use options.

The report noted there is potential on-site surface, subsurface, and groundwater contamination; potential asbestos, lead and PCB-containing materials on-site; and the presence of coal ash lagoons.

“I am hopeful that, with NRG contributing as a willing participant, we will work with federal, state, and county resources to find a new purpose for that site,” said City of Dunkirk Mayor Wilfred Rosas.

The 76-acre site and buildings are still privately owned by NRG Energy, and Bergmann notes that NRG’s environmental liabilities around the site are unknown and it’s unclear what liability would be transferred or retained by NRG Energy if the property was sold.

“While we have more work to do, this study identified site assets, opportunities, and constraints, and ultimately identified what we believe to be the highest and best uses for the site,” added Mark Geise, Deputy County Executive for Economic Development and CEO of the County of Chautauqua Industrial Development Agency. “Even though we are a long way from completing our mission, I look forward to continuing our collaborative process with Mayor Rosas and his team, as well as NRG, to realize a successful site reuse in the future.”

In 2019 Hilco Redevelopment Partners announced plans to build a data center on the site of an old coal power plant in Chicago it was buying from Midwest Generation, a subsidiary of NRG Energy. The State Line Energy plant in Indiana is another former coal-fired generating plant that has been turned into a data center campus.