Due to extreme weather conditions

The North American Electric Reliability Corp (NERC) has warned that the central and upper Midwest, Texas, and Southern California are at an increased risk of blackouts due to extreme weather conditions.

NERC is a non-profit organization which attempts to identify and reduce risks to the reliability and security of the nation’s grid.

The finding was reported in the NERC’s annual Summer Reliability Assessment, an assessment that looks at and reports on any area of concern regarding the reliability of the North American bulk power system for the upcoming summer season.

The 2022 assessment reports increased risks this summer due to wildfires, extended droughts, extreme heat, storms, and flooding in the central and upper Midwest, Texas, and Southern California.

This report is backed up by general climate research in the nation. According to the United States Environmental Protection Agency, the number of heatwaves across the country has steadily increased, tripling since 1960. 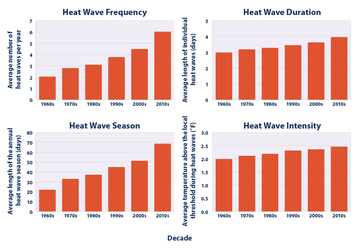 The agency has also reported a steady increase in the frequency, extent, and severity of wildfires in the US since 1980.

With the regularity of such incidents increasing, the grid is at a higher risk of outages.

“'Extreme’ doesn’t mean ‘rare,’” John Moura, director of reliability assessment and performance analysis at NERC, said. “We know these conditions are not rare.”

The risk of outages is, ironically, being proliferated by the transition away from fossil fuel generators to more environmentally-friendly substitutes.

The NERC report pointed to the electronic controls that link wind and solar farms to high-voltage grid networks as an area for concern. Called power inverters, these devices have to be programmed to keep working despite disturbances such as damage to high-voltage lines. According to the report, currently many are not. Moura stated that this particular issue is ‘one of the most dangerous things to happen on the bulk power system’ as grid operators can easily be taken by surprise.

Further concerns come from the increased grid reliance on energy sources such as wind and solar, which are intermittent and could add to the likelihood of blackouts. Many areas, such as California-Mexico also rely on hydroelectricity at times when solar and wind become unavailable. However, there is a significant concern surrounding the impact that droughts could have on hydroelectric transfers throughout the Western Interconnection.

According to the report, if the 3,400MW of new resources are available this summer as they should be, California should be able to meet peak power demands. However, if the season is unprecedentedly hot, then there could be a threat to power availability.

This being said, the complications of renewable energy should not be taken as a reason to back away from the essential grid transformation. Moura reinforced this, stating that NERC fully supports the move towards sustainable energy, but that the challenges require quick action to set technical equipment standards to deal with the problem.

While the assessment provides a somewhat sobering report, it is not entirely unexpected.

In June 2021, extreme hot weather was reported by the Electric Reliability Council of Texas as causing a number of power plant outages and a ‘record use of electricity’ for cooling, putting additional pressure on the grid.

Texas Government officials remain optimistic that they will be able to keep the power on even in an extreme heat scenario. Peter Lake, chair of the Public Utility Commission of Texas, said: “The grid is more reliable than it ever has been before.”

He attributes this confidence to the policies enacted since the 2021 outages in February caused by Storm Uri. This statement comes less than a week after Texas’ power grid had to ask residents to conserve electricity after six power plants went offline amid soaring temperatures, as reported by NBC.