From the start of 2022, Nokia's vLab data center in Tampere, Finland will be contributing its waste heat to the city's district heating system, thanks to a deal struck by its landlord, Castellum.

The Valtatie 30 business building in Tampere, will be connected to the district heating system, run by local utility Tampereen Sähkölaitos. The connection is made possible by improvements to the cooling systems of the data center, which recently moved to HPE's Greenlake on-premises data center-as-a-service offering. The connection will use heatpumps from Finland's Oilon, to boost the waste heat up to a useful 95°C. 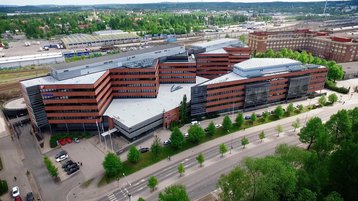 Nokia moved its IT to Google's cloud in October 2020, but the vLab research and development data centers were excluded from that deal. Around 2020, vLab moved to HPE's Greenlake scheme which offers HPE hardware on-promises on a hardware-as-a-service basis.

Turn on the pumps!

While the EU plans to be carbon neutral by 2050, Finland has a more ambitious goal of neutrality by 2035, and Valtatie's owner Castellum is aiming for 2030. Nokia itself is planning to be neutral by 2040.

vLab is part of Nokia Software, and is working on research for areas including 5G. It has switched to a Greenlake cloud-as-a-service, running on HPE hardware in the Valtatie 30 building. HPE and Nokia say this will reduce energy demands and make the data center carbon negative, based on the use of renewable energy sources, and liquid cooling using water from a nearby lake.

The building was connected to the district heating system in 2016, but the vLab data center is only now ready to sell its heat to Tampereen Sähkölaitos as a result of the Greenlake upgrade, installed with the help of engineering company Sweco, which made it possible to recover heat from the liquid cooling system.

"Our R&D vLab in Tampere, Finland is an important example of our commitment to taking actions against climate change. Thanks to our work with HPE Greenlake, this lab is not only carbon-neutral but it recovers the heat generated by our servers and IT systems for redistribution into the surrounding city," says Ron Haberman, CTO, Nokia Software

District heating is the most common way to keep homes warm in Finland, and Tampereen Sähkölaitos’ district heating network provides warmth for 250,000 Tampere residents. Roughly 35 percent of the energy in Finnish district heating systems comes from fossil fuels. Replacing this fossil component with waste heat is therefore a positive step towards neutrality.

“Due to the large volume of water, we decided together with the customer to have a larger district heating pipe built. In this way, we can use the entire capacity of the pumps and our customer doesn’t lose any of the heat produced,” Leinonen says.

As is often found, the data center waste heat is at a low temperature, but Castellum is boosting it to 95°C using six heat pumps from Finnish manufacturer Oilon. The heat pumps will produce about 50GWh of heat every year, and are more efficient than direct electric heating.

“That is about 2.5 percent of our heat requirements," says Leinonen. "The excess heat from the data center will be able to heat 50 apartment buildings per year, that’s a significant heat source for the district heating network."

As industry switches on to heat pumps, Oilon has opened a new factory in Kokkola, which will quadruple its industrial heat pump production capacity. “We are in the middle of a heat pump boom," says Oilon’s Sales Manager, Jussi Alpua. "Previously, the most important motive in investments was money, now it is also carbon neutrality."

Transferral of the heat to the district heating network will begin in late spring 2022 when the construction work is completed.