Nascent hyperscale developer Corscale is behind a new campus in Prince William County, according to the campus website.

The 130-acre 300MW Gainesville Crossing Data Campus is being built on Interstate-66 in Prince William County Northern Virginia, starting with a 72MW two-story building available from Summer 2022, according to the campus website. The site also says the project is being developed by Patrinely, a real estate investment company recently revealed to have a data center division called Corscale in development. 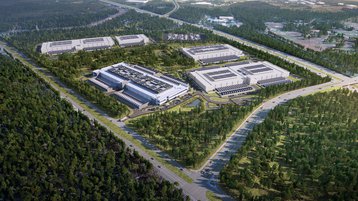 Gainesville Crossing Digital Campus (GCDC) is described in its brochure as "the latest hub in Northern Virginia’s booming Data Center Alley," endorsing Prince William County's claim to be the next data center hotspot after the real Data Center Alley in nearby Loudoun.

The site will total 1 million sq ft (92,000 sq m), with an on-site Dominion power substation capable of delivering a planned 306MW. The campus is aiming to achieve a PUE of 1.25 and to sell the space in 9MW chunks, with a power density up to 350W per sq ft, in five two-story buildings. Power can be delivered to the floor at 208V to 430V.

The company is offering options including core and shell to fully powered facilities, and can arrange financing. It is already leasing space in Building 1, a two-story facility with 230,000 sq ft (21,000 sq m) of white space and 72MW of power, due to be available in Summer 2022.

For security, GCDC is promising a 24x7 staffed security operations center, CCTV coverage with 90-day video retention, a K-rated fence, and crash barriers, and two-factor authentication to all critical areas.

The site was bought for $74.5 million in August 2020, by real estate firm Wolff Co, on behalf of the front company GCDC Purchaser, which now appears to be Patrinely.

Although Patrinely has not yet launched Corscale, its existence was revealed in a press release that said the nascent data center division was signed up to use Ledger7860's carbon accounting package.

Patrinely is a real estate investment company which in November 2020 had a big investment from Paxion Capital, a private partnership that involves Wolff Co's Fritz Wolff, as well as Jim Davidson, co-founder of investment giant Silver Lake, a previous owner of Vantage Data Centers which started in 2010 with the purchase of an Intel data center site. Silver Lake was also involved in the restructure of Dell.

At the time of the Paxion investment, Davidson said: “Patrinely Group is a perfect partner in our goal to leverage technology to create ‘the next big thing’ across complementary real estate platforms,” according to Realty News Report.

Another Paxion partner is Len O’Donnell, President and CEO of USAA Real Estate, co-developer of the GCDC project.