Project proposed by e-shelter has been dormant for 14 years

Work has finally begun on a data center project in Buckinghamshire, UK, that has laid dormant for 14 years, according to local press reports.

In 2008, German operator e-shelter received permission to build four data centers, totaling 78,000 sqm (839,600 sq ft), on a former tobacco factory in Wycombe, but the project did not go ahead. The project was billed at the time as "Britain's largest data center campus."

Now residents are reporting the site is being cleared, with trucks removing spoil, and a member of the council told local press that the owner of the site is proceeding with the originally planned data center project. 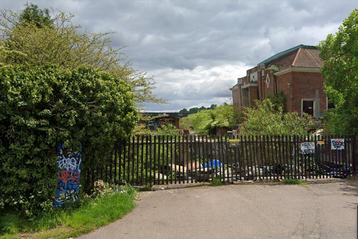 e-shelter was sold to NTT in 2015, but DCD believes NTT is not involved in the current project, as the land ownership has passed into other hands.

Residents are reporting a "huge operation" at the site of the Molins tobacco factory site, in Haw Lane, off the A4010, which has been closed since 2007, according to the Bucks Free Press. Council spokespeople have said the 14-year-old project is finally going ahead, despite numerous attempts to build housing on the site during the hiatus.

“We can confirm that works have been undertaken on the site. The planning permission was granted in 2008," councilor Peter Strachan, planning and regeneration cabinet member, told the BFP. “The owner is in the process of carrying out preliminary works - which include ecological fencing and general site clearance to facilitate an initial phase of building works.”

Another spokesman said the site is being prepared for the originally-proposed data center project: “We believe that the site owner is preparing the site for the approved data center buildings that have a planning permission.”

As well as the four data center, buildings, the site plans proposed 150 parking spaces. They also preserve the frontage of two buildings, one containing offices and the other a "ballroom", which have remained on site since the factory was demolished in 2008.

The site is listed as a historic monument, as it was first built in 1939 as a "shadow factory" making aircraft bearings. Tobacco machinery firm Molins bought the site after the war, and made cigarette machines there from 1950 until the factory was closed in 2007, after staff there had fallen from 2,000 to around 100 people.

Before the closure, Molins had submitted an ambitious plan to expand the site into a multi-tenant manufacturing park, with underground park for 2000 cars - a proposal which was rejected.

The 50-acre site was sold for £16.2 million in 2008, to e-shelter, funded by PFB Data Center Fund, a Guernsey-based property fund. The data centers proposed at that time would have been "Britain's largest data center campus" according to reports.

The development was proposed at the height of a data center boom, according to Tim Anker, of Colo-x, a UK data center watcher: "It was the high water mark of a rising tide of investment," he told DCD.

The financial crash of 2008 put paid to many projects like this, and their backers, PFB, set up by real estate firm Pinder Fry & Benjamin, went bust and was wound up, with its listing on the International Stock Exchange canceled in 2014. Pinder Fry & Benjamin was dissolved in 2017.

The land was sold at a considerable loss, for £7 million, to another real estate player, Luxembourg-listed ERLP. That firm is still given as the current owner on the UK Land Registry title, but Companies House reports, however, that various ERLP funds are either dissolved or in liquidation.

During the last 14 years, ERLP and other developers have tried at least three times to get planning permission for housing on the site. Two for 212 homes and then 130 homes were rejected by Buckinghamshire Council, who said that level of development wouldn't fit their plan for the area. During 2021, an outline planning application from Greystoke and ERLP proposed building nine homes on part of the site.

During 2021, workers from TMT construction were seen clearing the site, and the work has been continuing.

While the council has said the data center development is going ahead, it is not clear who the developer or occupier will be.

It appears that NTT did not acquire the site with the rest of e-shelter. It has since proceeded with another development; its large London 1 facility in Dagenham.

The eventual occupier is certain to be a hyperscale player, most likely Amazon, Microsoft, Google, or Meta. But it is not clear which one, or whether the company will own the site, lease it, or lease buildings put up by a wholesaler.

"It's certain to be one of the big four," said Colo-x's Anker.