Microsoft signs wind PPA with Potentia and Greengate in Canada

Microsoft has signed a power purchase agreement (PPA) to power its Canadian operations using energy from an upcoming wind farm.

Potentia Renewables Inc. and Greengate Power Corporation have entered into a 15-year PPA with Microsoft that will see the cloud company procure wind energy from the 198MW Paintearth Wind Project in Paintearth County, Alberta. 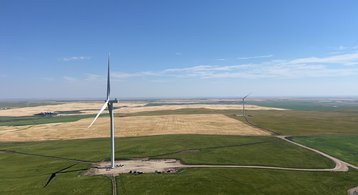 Microsoft will purchase approximately 543GWh of renewable energy from Paintearth Wind annually once it enters operation in 2023.

“Potentia is honored to work with Microsoft and appreciates the work that both companies put into this agreement,” said Ben Greenhouse, Potentia’s senior vice president of growth. “We look forward to growing our relationship with Microsoft and the community around the Paintearth project as we continue to grow employment and investment in Alberta’s renewable energy sector.”

The project is owned 75 percent by Potentia and 25 percent by Greengate, with companies breaking ground in September 2022.

“Greengate is thrilled to be working with Potentia and Microsoft on this important project,” said Dan Balaban, CEO of Greengate. “Paintearth Wind will create jobs and contribute meaningfully towards the goal of a net-zero electricity grid.”

Microsoft launched two Azure cloud regions in Canada – in Toronto and Quebec City – in 2016. The company recently filed to build another data center in Toronto on the site of a now-closed Lowes store. It previously signed a PPA for solar power in Alberta with the ATCO Group earlier this year.

“Renewable energy supply contracts like this agreement with Potentia and Greengate are key to meeting our goal of contracting 100 percent of our energy consumption with renewable sources by 2025,” said Chris Barry, president of Microsoft Canada. “This agreement with Paintearth is an important step in helping Microsoft deliver on our renewable energy commitments in Canada.”