And a big skills and transformation program

Microsoft has announced a data center region in Chile, along with an initiative to stimulate the country's digital economy and train people in digital skills.

The data center region will offer Microsoft cloud programs from data centers in the country, while the Transforma Chile program will provide training for up to 180,000 citizens, and set up an advisory board of local leaders designed to develop opportunities in the digital economy. 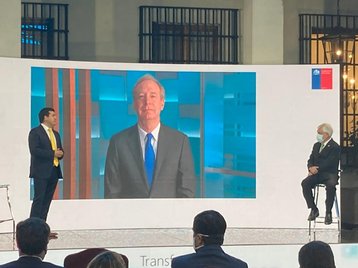 Microsoft president Brad Smith claimed the Microsoft cloud ecosystem will create $11.3 billion more revenue and 51,000 new jobs in Chile over the next four years: “We aren’t building a data center just to power our own business, but to provide a critical investment in Chile’s infrastructure that will serve all the people who live here and customers who operate here,” he said.

“Just as railways, power plants, highways, and airports helped Chile move into the future, today’s data centers have become the cutting-edge infrastructure of the 21st century. Our data centers near Santiago will make computing more accessible at even faster speeds, providing a new and secure platform for every part of the economy and supporting President Piñera’s and Chile’s ambitious digital agenda."

The Chile data center region will come under Microsoft's promise to shift to 100 percent renewable power by 2025, and will deliver Azure availability zones, as well as Microsoft services including Microsoft 365 and Teams.

Chilean businesses backed the move: “The long-term investment in the country will improve opportunities for everyone. As Microsoft’s partner on our own digital transformation journey with the cloud, we are investing in Chileans’ well-being, with the goal to protect Chilean workers, using the cloud to provide new ways to create safer labor work environments,” said Felipe Bunster, general manager, Mutual de Seguridad CChC. Other partners include Chilean bank BCI.

The Advisory Board is being set up with the Centro de Innovación de Universidad Católica Anacleto Angelini and a community of local leaders, to promote economic recovery and advise the government on skilling, best practices, and employment opportunities.

Microsoft also has an agreement with the European Southern Observatory (ESO) to use Artificial Intelligence and cloud services to get more astrononomical results from ESO’s Very Large Telescope (VLT) and the future Extremely Large Telescope (ELT) at the Paranal Observatory.

The skilling commitment will provide online training for up to 180,000 Chileans by 2025, provided through partners Fundación Chile, Innovacien, and Trust for the Americas. One of the first programs, Talento Digital para Chile, is a government initiative developed with Fundación Chile and CORFO will help 10,000 people develop technical skills for higher-quality employment.

Microsoft and Fundación Chile are also working with TP Digital, which has connected more than 500 teachers and 9,000 students of technical and professional institutions in the northern region of Chile, including Tarapacá, Antofagasta, Atacama and Coquimbo.