MC Digital Realty has 'officially' opened KIX11, the company’s second facility in Osaka, Japan. The company's website notes that the facility is not scheduled to be fully completed until June 30th and will not be open for customers until July 1st. 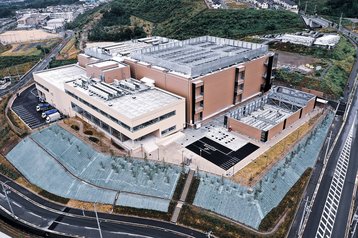 The company said that the data center is anchored with a multi-megawatt, multi-year agreement with a leading cloud provider.

When Digital Realty opened its first facility in Osaka (KIX10) two years ago (ahead of the joint venture) it also announced that it had purchased the land adjacent to the new site to build a second data center, where KIX11 now sits.

The first Osaka data center was a lot smaller both in scale and power at 7.6MW across 93,000 sq ft.

MC Digital Realty’s campus is located 20km from central Osaka and is built at an elevation of 656ft to try and mitigate the risk of earthquakes and flooding inherent in the region.

Bill Stein, CEO of Digital Realty, said: "The completion of KIX11 marks another milestone in the growth of our platform in Japan and an important step towards realizing the enormous potential of our partnership with Mitsubishi Corporation."