Putting a strange story of Russian ownership to bed

As for its Silver Spring, Maryland data centers, Bytegrid previously owned two 214,000 sq ft (20,000 sq m) data centers, one of which is a high-density enterprise storage vault. Lincoln Rackhouse has acquired one of the facilities, MDC-2, and confirmed to DCD that MDC-1 was sold to Intelishift. 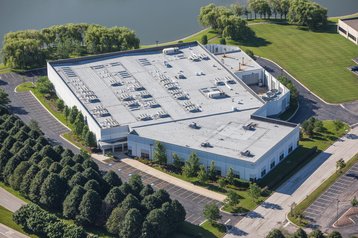 Rackhouse has also acquired Bytegrid's existing colocation, managed services, network and hosting business, but to ensure that Rackhouse does not compete with customers across the rest of its data center portfolio, the business will be split to separate Bytegrid's real estate assets from the services it provides.

“While our non-compete commitment to our current customers and operating partners remains, the Bytegrid acquisition is indeed all-encompassing, including the operational management and services business of three colocation sites. We do look forward to integrating these facilities into our nationwide portfolio and marketing those solutions to operators in the industry. We’re excited to further explore the interest that has been shown in these assets thus far now that we’ve closed the rather complex acquisition.”

Rackhouse has grown substantially with several large acquisitions, most notably when it bought a one million square foot (93,000 sq m) data center portfolio from a Fortune 500 financial corporation in October 2018. The original owner was not officially named, but DCD last year revealed that it was Bank of America, after tracking down the sales history and building permits of the facilities. That deal was also closed with the help of Principal Real Estate. 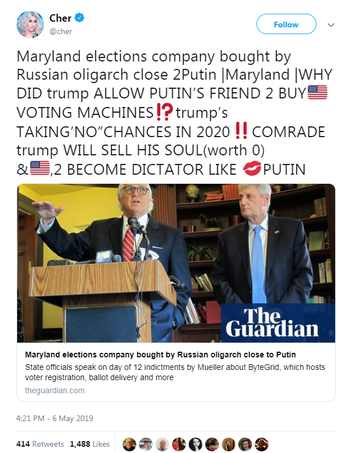 Just this week, singer Cher tweeted the story. However, her summation of the news is incorrect: The acquisition occurred before Trump's election and is not of voting machines. – Cher/Twitter

In July, after the US justice department released a grand jury indictment against 12 Russian military intelligence officers for computer hacking offenses during the 2016 US election, Maryland officials came forward with their own revelation: The FBI had warned them about Bytegrid.

In a news conference, Senate President Thomas V. Miller and House Speaker Michael Busch said that Bytegrid had been acquired by AltPoint Capital Partners in 2015. The business' fund manager is Russian, and its largest investor is the Russian oligarch Vladimir Potanin.

"[Potanin is] very close to the Russian prime minister, Vladimir Putin," Busch said. Potanin, the richest documented man in Russia, was named on a 2018 US Treasury Department list of Putin associates.

But, Busch added: “The FBI conveyed to us that there is no criminal activity that they’ve seen. They believe that the system that we have has not been breached.”

In a subsequent investigation, Homeland Security said that it “found no evidence of an adversary presence in the networks.”

“This plan will alleviate our concerns with the current ownership of our hosting vendor and demonstrates our commitment to having the most secure election systems possible.”

In February, Lamone said that it will use Intelishift, a Virginia-based data center and its subsidiary, The Sidus Group, to host election data. The Sidus Group was previously a unit of Bytegrid.