The two companies have signed an agreement to develop a data center that would use the cold energy from regasification at the LNG import plant at Incheon near Seoul, Korea. The combination would save energy at the data center and use waste cold energy, the companies said at a ceremony in Seoul for the signing of the memorandum of understanding (MoU). 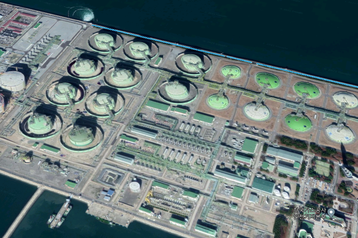 Korea imports a large amount of natural gas, and Kogas (the government-owned monopoly provider) is the world's largest natural gas importer, with four terminals handling some 54 million cubic meters of gas per year, which is burnt to create 290 GWh of energy, roughly 11 percent of the country's energy needs. Under Korea's latest carbon reduction plans, the county plans to be carbon neutral by 2050 by one of two routes: Plan A phases out all thermal generation including LNG, while would Plan B retains it for flexibility.

Against that backdrop, Kogas executives are presenting this proposal to use its waste heat as a step to reducing the overall footprint of LNG in Korea: “This MoU is another step for Kogas to move toward carbon neutrality based on LNG cold and heat along with the establishment of a cold chain cluster in Incheon New Port," said Hee-bong Chae, President of Kogas. "In addition, we will spur overseas cold and heat utilization businesses to secure new growth engines for the future.”

LNG gasification plans have been proposed several times as a good location for data centers. All natural gas is imported in liquid form, and when it is turned back into a gas, it absorbs a vast amount of heat, a process that could provide cooling for other industries. Data centers could be a natural fit, as up to thirty percent of a data center's energy is used in cooling the servers.

However, there are many obstacles to overcome and, if KT and Kogas succeed, this would be the first data center actually built at an LNG plant. Among the most obvious drawbacks to the idea, LNG plants are unlikely to have good fiber links, as the plants are sited remotely to reduce danger to the public. The Kogas Incheon plant, for instance, is on an artificial island, 8km offshore. The risk of explosion at LNG plants is itself another factor that might put data center customers off.

Singapore has been looking at the possibility, as it currently has a moratorium on data centers because of their energy demands. Singapore's LNG Corporation is working on a feasibility study for a supercomputer built at an LNG plant, along with the National Supercomputing Centre Singapore, the National University of Singapore, and government-owned consultancy Surbana Jurong. In 2019, Keppel Data Centres was involved in an earlier feasibility study.

In Ireland, where data center energy use exceeds ten percent of the grid and a growing movement wants future data center projects halted, there has been a proposal to build data centers as part of a new LNG plant at Shannon. However, the plant would be importing fracked gas from the US, something the Irish government has ruled out, and overall would be a step backwards in decarbonization.

Kogas and KT will cooperate in fields including a feasibility review, safety verification, and domestic and foreign business development.

The use of LNG cold energy could save around 12MW of power at a data center such as the one KT runs in Yongsan, Seoul, the companies claim.