Along with the Alpha DC Fund

The IndoKeppel Data Centre 1 (IKDC 1) is expected to be developed in three phases, eventually totaling around 105,300 square feet. The data center's core, shell and first phase are expected to be completed by the first half of 2020. 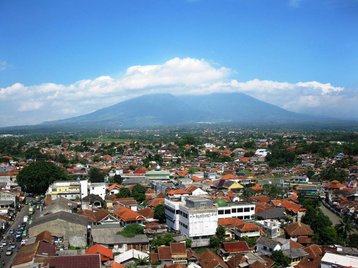 Bogor City with Mount Salak in the background – Wikimedia Commons/ArgoRaung

A data center in the rain

IKDC 1 and the surrounding three-hectare plot of land will be owned by a 60:40 joint venture between the Salim Group and the Alpha DC Fund, a fund backed by the Keppel Group’s Alpha Investment Partners Limited and Keppel Data Centres.

The site could be expanded to seven hectares, with multiple buildings on campus in Bogor, known as 'The Rain City' due to its near-constant precipitation.

"The Salim Group is one of Indonesia's biggest conglomerates with many diversified assets ranging from food, banking and telecommunications. For the past decade, the group has been keen on preparing and expanding its Salim Digital Ecosystem to support the nation's transformation to Industry 4.0. It's here," Sugiharto Darmakusuma, director of Salim Group, said.

"We have been actively investing in fiber connectivity for the past decade and now we are, I believe, one of the very few players in Indonesia who have this capability. We have fiber optics cables laid out all across Sumatra, Java all the way to Bali. We also have invested in our own submarine cables from Java to Singapore. We are expanding our data centers to achieve a global presence and we believe that Keppel Data Centres is the right partner to achieve that."

Wong Wai Meng, CEO of Keppel Data Centres, added: "The partnership with the Salim Group is a prime example of Keppel Data Centres' strategy of working with strong local players in high growth markets to design and build the robust infrastructure necessary for the digital economy's expansion and future proofing."

With a population of more than 260 million, Indonesia's data center requirements have naturally been growing. That need has been further exacerbated by tightening data sovereignty laws, including Government Regulation 82 (PP82/2012) and 38/POJK.03/2016.