Delhi, Mumbai, Kolkata, and Chennai lined up as the first cities to get 5G boost

Indian telco Reliance Jio has outlined its intentions to invest INR 2 trillion ($25bn) to rollout its Standalone 5G network across the country by the end of 2023.

The comments were made during the company's AGM, with chairman Mukesh Ambani bullish over plans to connect more than 1,000 cities with 5G. 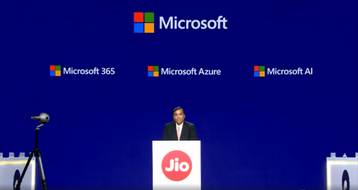 Jio's 5G push follows its acquisition of $11 billion of spectrum in the 900MHz, 3,500MHz, and 26GHz bands last month, with its 5G network set to launch in Delhi, Mumbai, Kolkata, and Chennai by October of this year in time for Diwali.

Speaking at the AGM Ambani said: "Subsequently, we plan to increase the Jio 5G footprint month after month. By December 2023, which is less than 18 months from today, we will deliver Jio 5G to every town, every taluka, and every tehsil [administrative districts] of our country."

During the AGM Ambani also announced a number of new partnerships with Meta, Google, Qualcomm, and Microsoft.