A dispute between local and national officials has broken out over plans to rezone land for potential data center use outside Limerick, County Limerick.

The Office of the Planning Regulator (OPR) has recommended that the Minister for Local Government and Planning, Peter Burke, use his statutory powers to direct Limerick City and County Council to remove the rezoning of a site on the outskirts of the city for a data center.

This is despite the state-owned Industrial Development Agency (IDA) reportedly expressing interest in developing a data center on the site. 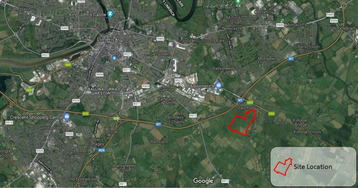 The OPR said no adequate reasons or explanations had been provided by councilors for not accepting its recommendations, saying the development plan has failed to implement its recommendation to omit the proposed zoning of an isolated 33-hectare site at Ballysimon House beyond the city’s boundary for a data center.

The Irish Independent reports Councillors chose to ignore the recommendation of both the OPR and the council’s chief executive not to proceed with the rezoning at Ballysimon as they claimed the site had excellent grid connection opportunities and was close to a natural aquifer that would provide water for a data center.

The site in question covers around 33 acres southeast of Limerick city. According to a 2021 letter to Limerick City and County Council’s Economic Development Directorate, planning consultants MKO, on behalf of David Fitzgerald and Family, requested to have lands on Commons Road in Ballysimon rezoned for data centers in the then-draft Limerick Development Plan 2022-2028.

The site is approximately 33.4 ha in area and is currently comprised of green field agricultural land; there are existing 110kV overhead electricity lines in the northern section of the site which traverse north-south and east-west and the 220kV Kilonan substation is nearby.

“The landowners have had expressions of interest from the IDA specifically relating to the potential development of a data center on these lands,” the letter reads. “The inclusion of such a site-specific policy would provide a key piece of infrastructure in a suitable location, which will facilitate improved economic opportunity for the multitude of businesses and services in the ICT and related sectors.”

In its new development plan, adopted in June 2022, Limerick Council said data centers provide the "background infrastructure across a range of essential sectors... which are imperative for the future economic growth of Limerick." It said facilitating the development of data centers was one of the council's objectives, especially those colocated with renewable energy sources. According to the new zoning map, the only other plot of land zoned specifically for data centers is the 18-hectare plot on Rosbrien Road in Rathroe.

In Dublin, the Irish Government and OPR are in dispute with South Dublin County Council for the opposite problem. Minister of State for Planning Peter Burke has ordered the council to reverse its ban on the development of new data centers in the area under its 2022-2028 development place - despite the fact a de facto moratorium by EirGrid on new grid connections for data centers in the capital city until 2028 renders the point moot.

The Mayor of Ennis believes Clare County Council will issue a final decision soon, after environmental group Futureproof Clare held a public meeting this week where local residents expressed concerns about the project.