A proposed data center in the West of Ireland has tripled in size, and is now a "key pillar" of Clare County Council's 2040 Economic Plan.

Dublin-based Art Data Centres is due to submit a planning application to build six two-story data halls covering 145 acres or 1.3 million sq ft (120,000 sq m), with access to up to 200MW of power, according to RTE. The proposal is already strongly supported by Clare County Council, which rezoned land near the town of Ennis in 2019 for the project. At that time, the proposal for a €400m (£472m) data center faced opposition from residents. Now, the proposals due to be filed are for a €1.2 billion ($1.4bn) facility. 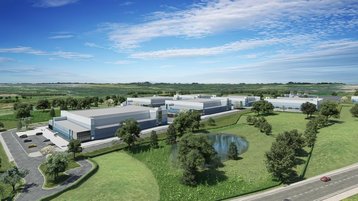 Power shift to the West

Development manager Tom McNamara, of Tom McNamara and Partners, said the West of Ireland location would ease pressure on the grid around Dublin, according to RTE.

"Development of this data center campus has been specifically identified as a transformational site by Clare County Council in its Draft Ennis 2040 Economic & Spatial Plan and is in accordance with the Government's role for data centers in Ireland’s Enterprise Strategy," he said. "With Eirgird increasingly focused on data centers locating away from Dublin and the east coast to reduce pressure on existing grid infrastructure in those areas, projects like this can avail of underused grid capacity in other regions and tap into the growing number of renewable energy developments in the west and south of the country that offer clean sources of power."

The site on Tulla Rd at Junction 13 of the M18 motorway connecting Galway to Limerick, would have a vertical farm as well as six data halls, according to a planning notice, published today, which asks for 10-year planning permission.

In 2019, the Council enthusiastically backed the proposal, with a councilor, coincidentally also called Tom McNamara, saying the data center project would be "the same as having a goldmine," according to a report in the Irish Times. "The spin-off from this for Ennis and Clare will be unbelievable.” (This Tom McNamara is a community activist and retired Fianna Fáil politician with a 38-year career in psychiatric services).

The development promises to create 250 data center jobs, and around 1,200 during six building phases, the first of which would begin in late 2022.

The scheme would demolish a single-story farm house and eight farm buildings, and build six data center buildings, each with a maximum height of 19 meters (62 feet). The site would also have access to 200MW of power from the local grid as well as a 200MW on-site backup energy center with 18 lean-burn natural gas engines, each with its own 25m flue.

The scheme has been designed by Colin Hyde of ARC:MC, and Robert Thorogood of HDR, and the site was zoned for data centers and generating infrastructure in 2019.

Ennis is a small town, but it is close to Shannon international airport, and has access to power and fiber, so local politicians hope to lure more tech development there.