Fraunhofer will operate the first IBM Quantum System One in Europe

IBM has delivered its first quantum computer in Europe to the Fraunhofer-Gesellschaft outside Stuttgart, Germany.

The company has installed an IBM Quantum System One to one of the applied research organization’s centers in Ehningen in Baden-Württemberg.

“Quantum computing opens up new possibilities for industry and society,” says Hannah Venzl, the coordinator of Fraunhofer Competence Network Quantum Computing. “Drugs and vaccines could be developed more quickly, climate models improved, logistics and transport systems optimized, or new materials better simulated. To make it all happen, to actively shape the rapid development in quantum computing, we need to build up expertise in Europe.”

Fraunhofer will operate the quantum computer and make the system available through the Fraunhofer Quantum Computing Competence Network to companies and research organizations that wish to develop and test applied quantum algorithms and gather expertise in the field.

“With our platform around the IBM quantum computer and our Competence Network Quantum Computing, we are offering all companies and research institutions the opportunity to play an active part in advancing this future technology, gather the expertise they need to thrive in the quantum age, and apply the newly acquired skills to good advantage,” said Prof. Reimund Neugebauer, president of the Fraunhofer-Gesellschaft. 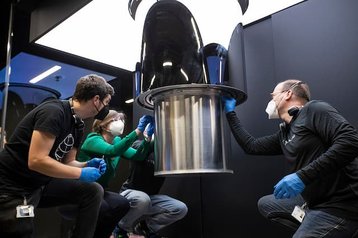 The machine utilizes IBM’s 27-qubit Falcon processor and is already being used to study new simulation approaches for materials in energy storage systems. The system will also reportedly be used for financial asset portfolios as well as improving the stability parameters in energy supply infrastructures.

The Covid-19 pandemic created challenges during assembly, meaning it had to be done remotely. The IBM team in Germany initially had no experience in assembling the full system. IBM’s US team wasn’t able to fly to Germany, so the team created a course in quantum assembly for the German engineers and delivered classes via video calls.

“I was on-site in October 2019 where I had the chance to interact directly with the team doing local design work, get everyone involved—electricians, to plumbers—and walk through the plans in detail,” says Chris Lirakis, IBM quantum lead for quantum systems deployment, and based at IBM’s Yorktown Heights lab near New York City. “It's the only way that you can read people’s body language, take cultural and language differences into account.”

The Quantum System One was assembled in Ehningen. One of the crates shipped was custom-built to withstand vibration isolation, with shock-absorbing material and brackets that could be bolted down, making the entire crate impossible to tip over.

“The first installation of an IBM Quantum System One in Europe will accelerate progress in this field and give companies of all sizes access to the technology as they prepare to enter the quantum computer era,” added Gregor Pillen, General Manager for IBM Germany, Austria, and Switzerland.

In March, the company announced it would install its first private sector on-premises quantum computer in the US at the Cleveland Clinic medical center. Another QSO system is due to be delivered to the University of Tokyo in July but housed in an IBM facility in Japan.

First announced in 2019, the System One is enclosed in a nine-foot sealed cube, made of half-inch thick borosilicate glass to contain the required super-cold temperatures. IBM says its largest quantum computer is currently capable of containing 65 qubits, and the company plans to release its 127-qubit IBM Quantum Eagle processor sometime in 2021. It hopes to unveil its first 1,000+ qubit systems by 2023.

Prior to installing on-premise systems, IBM was allowing companies to access more than 20 Quantum systems through a cloud-based web portal. The company says 150 organizations currently have access to its Quantum fleet via the cloud.