Based in Silicon Valley

US colocation provider vXchnge has deployed a terminal from satellite communications company Hughes in one of its data centers.

Hughes' Jupiter System is a Very Small Aperture Terminal (VSAT) which will link to vXchnge's network so it can allow better coverage for the company's Internet service, Hugh-net. The VSAT consists of a router and satellite dish which receives signals from Hughes' high throughput satellites (HTSs).

HTSs provide a higher throughput link than regular called fixed-satellite service (FSS). Hughes has access to more than 40 such HTSs which deliver a range of broadband applications for its Internet business. 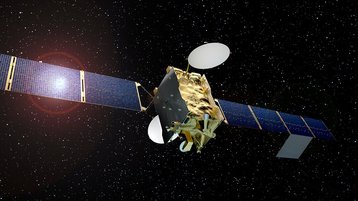 An digital image of an EchoStar satellite – EchoStar

High in the sky

Satellite communications provide a signal to devices on Earth ranging from telephone utilities, television, radio, and Internet connectivity. Such orbiting gadgets are used in military, aviation, radio telecom, space exploration, and the oil and gas industry.

According to MarketWatch, the satellite communication sector is expected to exceed more than $8.9bn by 2024 at a compound annual growth rate of 10.5 percent.

Hughes is owned by EchoStar, a satellite fabricator. Hughes was bought by EchoStar in 2011 for around $1.3bn. The company is based outside Washington DC, in Germantown, Maryland, USA. EchoStar's main launch provider is Elon Musk's SpaceX.