Conduction cooling test gets experimental with the backup power

Colocation provider H5 has added an emerging battery technology as backup for a test installation of innovative cooling at its data center campus in Phoenix Arizona.

A year ago, the company opened a demo high performance computing (HPC) suite, which uses conduction cooling from Forced Physics DCT. It now has sodium-ion batteries from Natron energy, a specialist battery startup. 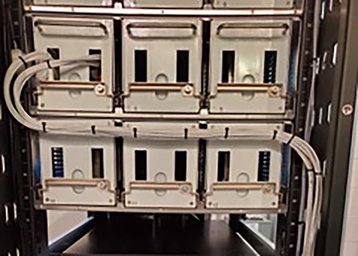 Sodium-ion batteries could potentially be a cheaper and safer alternative to the very widely-adopted lithium-ion technology, and a small number of companies have been developing them. Natron Energy's version of the technology uses chemicals related to the pigment Prussian Blue (a ferrocyanide compound).

H5's HPC suite consists of a 32kW OCP-compliant rack and a 20-foot ISO container which are cooled with Forced Physics’ JouleForce cooling technology, which uses heat conduction and outside air with no liquid and no forced convection.

It now has a Natron BlueTray4000 battery set which will provide a 48V DC supply long enough for the HPC rack to ensure the load can transfer across safely to generator power. At H5's Phoenix facility, the backup generators are designed to carry the facility's full load within fifteen seconds.

“We at Natron are delighted to be an integral part of this HPC demonstration project with Forced Physics DCT and H5 Data Centers, as the increasing demands of new IT workloads have surpassed the capacity of existing lead and lithium batteries to safely provide backup power matching these new peak demands,” said Jack Pouchet, vice president sales of Natron Energy.

One of the benefits of sodium-ion batteries is their use of sodium which is a much more widely-occurring mineral than lithium. Scott Davis, Forced Physics' CEO said both companies are concerned for the environment: "Combined with the Natron battery, our system can achieve power usage effectiveness (PUE) ratings never seen within the data center community. We are also pleased to share a common goal of sustainability.”

This is Natron's first deployment in a production environment at a data center. “We look forward to working with Natron Energy as they introduce new batteries and capabilities to the data center market,” said Carlos Oliveira, H5 Data Centers vice president.