Demo suite is an OCP rack in H5's Phoenix facility

The suite includes a 32kW OCP-compliant rack, and a 20-foot ISO container, showing off Forced Physics’ JouleForce cooling technology, which uses heat conduction and outside air with no liquid and no forced convection. 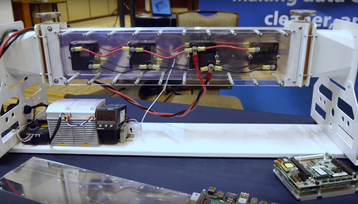 A cool oasis without any water

This is the first full demo installation of JouleForce, which is based on patents awarded to Scott Davis in 2005. Davis founded Forced Physics Data Center Technology (DCT) and since 2015, the company has shifted from research to commercialization and began to manufacture products at the end of 2017.

The company claims that JouleForce reduces cooling energy by more than 90 percent and could achieves a PUE (power usage effectiveness) of 1.02. It attaches electronics directly to a metal conductor which transfers heat to a convection current of air, according to a description given to DCD by Forced Physics CTO David Binger at DCD>Colo+Cloud in Dallas last year,

Forced Physics is aiming its products at high-density applications, with a promise that power demands of more than 30kW per rack can be sustained without using fans and air conditioning units, or moving to liquid cooling.

"We are motivated to improve data center efficiency and think this technology will change the way data centers are built and operated,” said Davis in a press release. “The capability of isolating the standard OCP rack at H5 allows us to showcase energy saving, high density IT cooling without the need to condition the air.”

The use of standard OCP racks appears to be a development of the technology as last year, Binger implied that Forced Physics would be leading a change in the design of data center racks (see video).

H5’s 20MW Phoenix campus is a Tier III data center located in the Arizona Technology Corridor, the area was once just a vast stretch of Arizona desert, but is now home to several data centers including a $2 billion Apple ‘command center..’