Renault also wants the tech giant to train up its staff

French car manufacturer Groupe Renault has contracted Google Cloud to digitize its business and improve its capabilities while also training up its staff.

The company's data will be stored on Google Cloud and the platform's services will be used to provide analytics for Renault to make strategic business decisions.

Both Google Cloud and Renault have not released any details surrounding price but, according to Bloomberg, it is understood the contract covers a multi-year term.

Since 2016, Renault has been implementing its industrial data management platform to harvest and analyze data from 22 Renault factories, amounting to 72 percent of its entire production.

This is all part of the company's digital strategy, in which it wants to embrace the 'fourth industrial revolution.' This revolution concerns the shift to robotics, automation, and IoT in the global industrial sector.

Renault said: "The 4.0 revolution is ushering in new business functions, new skills, and new tools. It is the driving force behind a connected, agile, and competitive production base."

Renault, as a result, is accelerating its infrastructure changes and trying to bring in more technological solutions onto the factory floor. It will now be Google's task to expedite this data harvesting and processing so Renault could make reasoned decisions on how to be more efficient. 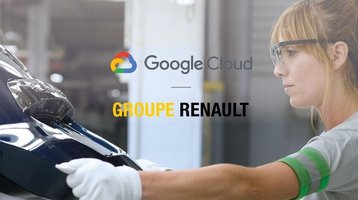 Renault will be using Google’s cloud services to refine its industrial data management platform and train up its IT and manufacturing divisions to work with the new systems.

Thomas Kurian, CEO of Google Cloud, said: “The automotive industry has innovation in its DNA, and there is immense potential for digital technology to have a significant impact on production."

Back in 2019, Kurian announced at Google Cloud Next '19 that Renault was among its new manufacturing and industry partners along with Bose, Enel, Samsung, and UPS.

"Companies are looking for new solutions to accelerate their digital transformation in two ways: the need to lower costs and improve agility, and the need to open the door to new possibilities," he said at the time.

However, this is the first time Google has scored a major industrial contract in France.

Just across the border in Germany, Google Cloud earlier this week signed a two-year contract to overhaul with Deutsche Bank's IT infrastructure. It won out against stiff competition from both AWS and Microsoft Azure, two larger rivals.

Renault has been having serious financial trouble with thousands of layoffs coming as a result of sales drying up due to the Covid-19 outbreak.

In May, French Finance Minister, Bruno Le Maire said Renault could disappear if it didn't get any help and adapt to changing circumstances.

The French Government, desperate to keep it afloat, granted a $5.7bn loan to the manufacturer after it was approved by the EU which had loosened its rules surrounding governments helping domestic companies affected by Covid-19.