Alongside $900 billion in Covid relief, the sprawling US Consolidated Appropriations Act demands a new study into data center energy use, a training program, and an open data initiative

Alongside $900bn in Covid relief, the combined Act included many measures added in to get them passed before the end of the congressional term. These included potentially controversial measures relating to copyright and abortion - but also a number of provisions aimed at data centers. The Act calls for a new study into how much energy and water data centers use, and stipulates that federal agencies analyze and improve the efficiency of their data centers.

After difficulties printing the mammoth document, most members of Congress having just hours to read the bill. Despite this, it was passed by the House and Senate on December 2021. It will be sent to the President in the coming days to be signed into law, something The White House has signaled Trump plans to do - update: Trump has since criticized aspects of the Covid relief. Update 2: Trump signed it into law on December 27.

We read it so that you don't have to 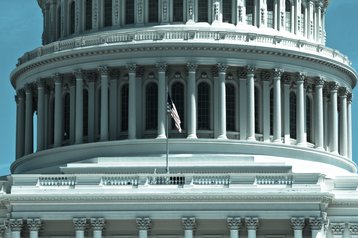 The largest bill ever passed by Congress in terms of size of text, the whopping 5,593-page Consolidated Appropriations Act includes a wide range of provisions and acts within it covering nearly every aspect of government operations.

Among the sections is the Energy Act of 2020, itself an amalgamation of numerous energy bills introduced in the US Senate and House of Representatives.

Within the Energy Act, sections 1003 and 1004 focus on data center energy efficiency, some of which builds upon the Energy Independence and Security Act of 2007.

The act calls for an update to the 'United States Data Center Energy Usage Report,' a seminal Lawrence Berkeley National Laboratory study on data center energy usage from 2016 - itself an update to a 2007 report.

No mention is made of a report from the same authors published earlier this year that tracked global data center energy usage.

The new report will have to be completed no later than four years after the enactment of the Energy Act of 2020, and will be made publicly available.

It should include "a comparison and gap analysis of the estimates and projections contained in the report with new data regarding the period from 2015 through 2019," and an analysis of the impact of technologies like cloud and virtualization on public and private sectors.

Also in the report will be "an evaluation of the impact of the combination of cloud platforms, mobile devices, social media, and big data on data center energy usage."

The report will also look at water usage in data centers and recommend how to reduce it. It should also provide projections and recommendations for best practices through fiscal year 2025.

The Secretary of Energy, in collaboration with the Director of the Office of Management and Budget, "shall maintain a data center energy practitioner program that provides for the certification of energy practitioners qualified to evaluate the energy usage and efficiency opportunities in federally owned and operated data centers," the act states.

Federal agencies should then "consider" using those certified energy practitioners to evaluate their facilities once every four years.

As part of the act, the US government plans to establish an open data initiative relating to energy usage at federally owned and operated data centers, "with the purpose of making the data available and accessible in a manner that encourages further data center innovation, optimization, and consolidation."

As part of this, the Secretary of Energy should "consider" using the online Data Center Maturity Model, developed by industry body and lobbying outfit The Green Grid.

The Secretary of Energy, "in collaboration with key stakeholders," shall facilitate in the development of an efficiency metric that measures the energy efficiency of a data center (including equipment and facilities), the act states.

It is not clear how much effort the Department of Energy will put into 'facilitating' the new metric, although many in the data center industry have long pointed out the limitations of the commonly used power usage effectiveness (PUE) metric.

Within less than a year of the act being enacted, each Federal agency is to coordinate with the Director of the Office of Management and Budget, Secretary of Energy, and Administrator of the Environmental Protection Agency "to develop an implementation strategy (including best-practices and measurement and verification techniques) for the maintenance, purchase, and use by the Federal agency of energy efficient and energy-saving information technologies at or for facilities owned and operated by the Federal agency."

Also within 180 days, the Director of the OMB will establish performance goals for evaluating those efforts by Federal agencies. The Chief Information Officers Council will chime in with best practices for reaching those goals.

A note of caution

Previous laws that aimed to reduce the US government's sprawling data center footprint set similar efficiency targets, but many agencies failed to meet them.

In a 2019 report on the Federal Technology Acquisition Reform Act (FITARA) and the Data Center Optimization Initiative (DCOI), the Government Accountability Office detailed the struggles of consolidation efforts.

It found that the US government had closed 6,250 data centers (using a generous definition of data centers that includes nearly every room with an operational server), but that many agencies were lagging behind DCOI targets.

Only 13 of the 24 agencies were on track to meet their closure targets, as set by the OMB. "Several agencies indicated that they were seeking revised closure goals because they viewed their goals as unattainable. Specifically, officials from Interior’s Office of the CIO stated that a number of the department’s non-tiered data centers were either mission-critical or not cost-effective to close."

Two agencies also reported that they did not achieve any fiscal savings from closures.

Agencies were also told to hit 65 percent server utilization in both tiered and non-tiered data centers. According to their definition, a tiered data center has a separate physical space for IT infrastructure, an uninterruptible power supply, a dedicated cooling system or zone, and a backup power generator for a prolonged power outage. Everything else is a non-tiered data center.

Just for tiered data centers, the OMB aims for 100 percent energy metering, 80 percent facility utilization, and a PUE of 1.5 or lower (1.4 or lower for new builds). It targets a virtualization ratio of four or higher for operating systems to physical servers.

"However, for the energy metering, facility utilization, and server utilization and automated monitoring metrics, no more than 3 agencies reported meeting each."

Five agencies, meanwhile "were not able to report any progress against either or both of the server utilization or power usage effectiveness metrics because their data centers lacked the required monitoring tools to measure progress in these areas."