Fujitsu and University of Tokyo to deploy integrated AI/HPC supercomputer

The University of Tokyo is due to switch on a 33.1 petaflops supercomputer, made by Fujitsu, which will integrate AI and HPC.

The University's Information Technology Center, will use the Wisteria/BDEC-01 on economic and social projects as part of Japan’s Society 5.0 project, according to the announcement. The machine has a simulation subsystem called Odyssey, and a data learning node group called Aquarius, and is due to begin operation in May 2021.

Wisteria to save the world? 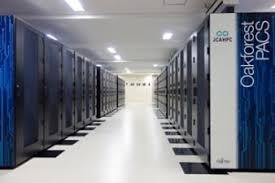 The Odyssey simulation part of the system will take up 20 racks, and delivers 25.9 petfaflops provided by 7,680 Fujitsu A64FX Arm-based units, as used in Japan's Fugaku supercomputer which currently leads the Top500 supercomputer ranking. The Aquarius data and learning nodes use 90 Intel Ice Lake Xeon processors, along with Nvidia A100 GPUs, to give a performance of 7.2 petaflops. The total performance, 33.1 petaflops would make it the second fastest supercomputer in Japan.

The system is being built on the Kashiwa II campus of the University of Tokyo. It will start operation as a shared system on May 14, 2021, and go into general use in October after months of trial and testing.

The campus already hosts the Oakforest-PACS supercomputer, and this system's naming follows the arboreal theme. "Wisteria (Shito) is named after the 'Fujihime Densetsu' that is handed down in Teganuma in Kashiwa City, and like the wisteria vine, each node group and file system group for "calculation, data, learning" fusion are closely related," says the release.

The naming of the two node groups is more pointed: Odyssey and Aquarius were the command module and lunar module of the Nasa Apollo 13 mission to the moon, which came close to disaster, but was saved thanks to collaborative sicnec and engineering work. "The Earth is now in unprecedented danger due to the new coronavirus infection," comments the University's announcement. "Just as Odyssey and Aquarius supported the safe return of the Apollo 13 crew to Earth, Wisteria / BDEC-01 hopes to contribute to protecting and saving the Earth and humanity."